What I Learned About Running This Week + TMI

When I got home from my run today I had some water, took a shower, and ate a bit of Nutella on a flour tortilla. It was lovely. The week in running, however, has not been.

I’ve been happy with my motivation this week. Forcing myself up hella early to get my run in as the sun rises (or “Runrise” as I’ve learned from See Fleck Run) is a great way to get the day going. You’ve got your miles in, you’ve got your cardio in, your evening is free – it’s perfect and I have no idea why I don’t do it more. Tuesday was my first run of the week but my Tuesday run story actually starts on Monday…

My work station was moved a few rows over the weekend and I spent the first hour of my day Monday setting my equipment back up, hanging up my wall art, placing all of my cube toys (mostly Lego characters, a couple of Storm Troopers, a Captain Spaulding bobblehead and a Hulk Hogan Funko). I had a power cord running from my external hard drive into the back of my UPS in the floor but it was positioned in a way that allowed me to accidentally unplug it with my foot. Realizing my error I got down in the floor to fix it but not before I dropped my knee – hard – on the wheel of my chair. I think I may have yelped, I can’t remember; what I can remember, though, is that I sat in the floor afraid to stand back up, afraid that I had legit hurt myself. I was able to crawl back up into my chair and tried to just not move the rest of the day. I was successful.

During my Tuesday run, however, as I approached a decent pace, my knee shouted at me “Hey! Remember what you did yesterday!?” I did. My knee wasn’t in “bad” shape but it certainly wasn’t 100%. A healthy runner would’ve listened to their body and taken it easy or taken the day off but I didn’t. I just ran slowly. It was 6am, the sky was starting to light up a bit, everything was gorgeous…Except my knee. I trotted out 3 miles in just less than 37 minutes. Pathetic.

What I learned on Tuesday: While running doesn’t really hurt your knees like “they” say it does, other things do, and your knees are pretty important to your running health. Go figure.

My Thursday run happened at the same time – runrise – and it was a bit better. The folks I pass on Ebenezer are incredibly friendly and the number of runners out at that time of day is probably twice the number of the evening runners. Old people, young people, ladies, gentlemen, dogs, all saying hello as they pass, and the ones that don’t say anything still wave. It’s nice. I was also feeling great but my knee was still whispering the threat of mutiny. Without realizing it I was still running slower than usual. I feel like now that I’ve found a comfortable 10k pace I can’t run any other pace. I finished 3 miles in, again, just less than 37 minutes. Pathetic.

What I learned on Thursday: I’m doomed to run a 10k pace for the remainder of my days.

Today I decided two things: For my long run I was going to attempt 7 miles instead of the usual 6. Also, I’m going to go somewhere new. Knoxville’s many Greenways are fabulous and I’ve been meaning to give them a shot for running so today I decided to hit the 10 Mile Creek Greenway starting just behind the theater in Cedar Bluff. Music started – Superdrag’s “Head Trip in Every Key” and “Regretfully Yours” set on shuffle, starting with a steady walk, building into a slow jog, finally finding that 10k pace I’ve been damned to for eternity.

Before I get into the weirdness I’m going to share some photos I took on my run. The piece of the Greenway I ran on weaved through several parks, in and out of wooded areas, along main roads, under three overpasses, one side by side with the creek the Greenway runs parallel with. I loved some of the playground equipment, the Little Free Library I came across and, most of all, the sunrise. 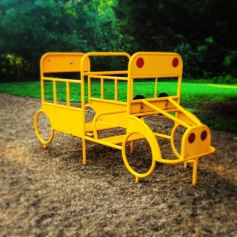 It was a lovely run, visually. I wasn’t really getting that winded like I thought I would. I can do 7 miles, easy, right? While I started with a walk and worked into pace, my intention was to keep that pace until I crossed the threshold at the 7 mile mark. Well…

I didn’t run the whole thing. Yes, I stopped and took several photos and even stopped once to check out this bird nest that was sitting on top of a picnic area’s grill. I was forced to slow down to a walk several times, though, because I got not one, not two, but three separate side stitches requiring a slowed pace, more focus on breathing, and a little stretching. Most importantly (and most embarrassingly) my stomach started rumbling just after mile 2. Several stops were done in an attempt to not, you know…

Interestingly enough, though I ran 3-1/2 miles one way (or at least thought I did), when I repeated the route running back my final milage ended up being merely 6.6 miles. I could have ran the remaining 0.4 miles, but I needed to get home, for real.

When I made it back to my car I was able to control myself long enough to get some basic stretching in – a few touches of the toes, hitting the hamstrings, the quads, and the calves, etc. I keep a hoodie in my car so when I’m finished running I can strip off my soaked shirt and throw it on in an attempt to prevent my car seats from getting soggy and so I did that. Today, though, and just like every other time I run a distance longer than 5k, I noticed that my nipples were super raw. Nipple chaffing is common for male runners and there’s not a lot that can be done short of the age-old band-aid trick. While I don’t intend to keep these distances up much longer, I think I’m about to cave in. I simply refused to do the band-aid thing but these nips are the actual worst and I’m pretty sure I’ve ran out of fucks to give. I just wish there were a more stylish way of doing it.

While delayed from the aforementioned issues I was happy to find out that with side stitches, with occasionally “don’t shit” walks, and with taking several photos, I still ran the 10K distance in 01:14:something which is very close to my 01:10:00 goal I have set for August 22. I think I’ve GOT this!

What I Learned Today: The Greenway is fabulous, I’m going to be able to run this upcoming 10K with little problem, and I’m no longer too cool to protect my nipples.

And that’s it. I logged three runs for 12.6 miles this week, burning 2,293 calories in the process. Add to that the 3,000+ calories I burn per week from boxing and it would appear as though I’m playing the role of slasher in an 80’s horror flick only it’s calories that are getting killed and not teenagers having premarital sex. I just hope one of those calories doesn’t come back and kill me in the end (spoiler alert: it will).

Three weeks and six days stand between me and my first 10k. 11 runs between now and then. Only 9 runs remain before my official “runnerversary” which reminds me…Here’s the updated stats:

Who am I kidding? I know that isn’t going to happen. When I finished my run today (despite the shit and the sweat and the nipples) I thought to myself “Almost 7 miles? I think I could do a half this year…”

Please don’t tell anyone I said that.

I’ll close with a couple of those Superdrag songs that got me through my run this morning and a pic of this sweet Rocky tank I picked up this weekend: