A week or so ago I mentioned that I was going to be taking part in the first annual Running Blogger 10K, introduced by my lovely Irish running buddy Rachel over at Running Not Racing. After learning about the Hogwarts Running Club I’ve been intrigued by the whole concept of “virtual race” but have yet to participate in one. The thought of running “with” people all around the world is very cool so when she mentioned this “race” I was all about it.

Rachel has been working very hard for the last few months trying to take some time off her 10K PB while on her journey to her first half-marathon (sound familiar?) and December 6 was her day of reckoning: had her program paid off? I was very happy to hear that her “race” went well and not only did the program work but she took a whopping 1:55 off her 10K PB! Rachel, I’m very proud of you and can’t wait to see how well you do on your road to half-marathon greatness!

Sometimes it bothers me that I don’t have any real running friends here in Knoxville, but it does help to have them in Ireland, the UK, and Canada, cheering you on and keeping you (somewhat) accountable. You guys are awesome!

As for me, I didn’t fare so well. For starters, I was focused on participating in the race on Saturday, which is great, except that Saturday was December 5 – the race was supposed to be on the 6th. I didn’t realize it wasn’t the 6th until an hour or so after I finished running for the day. Oops.

So I ran a day early and I ran a little further than 6.2 since this week was slated to be another long run on my half marathon training. My goal was 9 miles total so I’d run out 4.5, turn around, then stop my tracker at 6.2 so I could record my time for the race and then start another session for the remaining 2.8 miles. Knowing that I had nearly another 5k in addition to the 10k I was running, I purposely slowed my pace down a bit to save myself some energy (plus I stopped to take some graffiti photos in a tunnel). In the end, my 10K time was a lousy 1:15:27 at an equally lousy 12:10/mile pace. I wasn’t happy but in the end I just said “Meh – I ran 9 miles. BITE ME.” I think that’s a healthy runner’s attitude!

One of the rules of the race was to include, with your time, a sweaty selfie, so I’m doing just that along with some of the new graffiti that’s been added to my route. 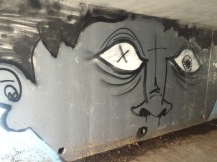 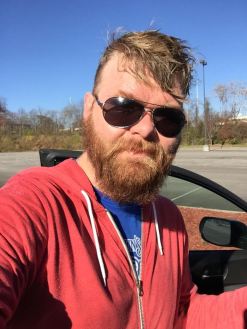 My feet/ankles were extremely sore the rest of the day but I toughed it out long enough to do a half day of shopping and then met our hockey buddies out for an early birthday celebration at Downtown Grill and Brewery for yours truly before heading to the Knoxville Ice Bears game. Overall a lovely day but I noticed my right foot was hurting a little more than usual. Sunday was the same – the area along the edge of my right foot hurts pretty bad and I think there’s a bruise on my ankle. Lame. I’m still hobbling around a little bit today but I did make it to the gym this morning and taught the noon class as usual.

I’m hoping the pain goes away over night tonight as I found out that in order to hit my goal of 350 total miles in 2015 I have to get in about 9 miles per week for the rest of the year. Considering that’s going to include two 9+ mile long runs I don’t think it will be super hard to achieve, I just have to actually get out there and do it!

So my totals for the week were: