Back in my last Bachelor Chronicles post I talked about all the times I got in trouble for drumming too much and how often I played faux concerts for equally faux audiences. I thought for sure I’d be in a band once I got old enough — and actually learned how to play an instrument.

Being in a band was just never going to happen for me. But I’ve always had an appreciation for the scene and wanted to be involved in it in any way I could. I’d spend the next decade or so doing freebee design work for local artists, most of which were never used (The Beat Officers changed their name after I made several t-shirt designs for them; Woe to the Inhabiters broke up after I made a custom painting and album cover design for them; Pink Carnage took my favorite graphic I ever designed and tossed it aside for someone else’s logo design that was merely a downloaded font colored pink).

Finally, a year or two ago, I got a pretty rewarding gig doing design and layout work for my friend’s band The Lees of Memory. The Lees are made up of John Davis, Brandon Fisher — both formerly of Superdrag, a band I’ve admired for years — and Davis’ Epic Ditch bandmate Nick Slack. The guys released a couple of full lengths — Sisyphus Says (2014; released by SideOneDummy) and Unnecessary Evil (2016; released independently) — and a few 7″ singles including 2015’s Soft Places / Within a Dream II, 2015’s Ain’t No Changing Baby’s Mind / Let’s Turn Our Love Up Loud and 2016’s All powerful You.

While their band has three proper members, the nature of their sound requires a much larger band (read: 7-9 guys) to replicate in concert. A combination of this and the fact that the members all live in different towns means concerts are extremely difficult to organize if not impossible altogether. So when the band was invited to play Secret Stages Music Discovery Festival in Birmingham, Alabama, on August 4, you’d be an idiot if you’d think I’d miss it.

And, of course, I took my camera. Small festival though it may have been, it was one of the coolest projects I’ve ever gotten to be a part of.

The band played at midnight to a sexy audience at the Hangar in Birmingham’s Avandale neighborhood. In addition to Brandon, John and Nick, the band was rounded out by Sam Powers (Superdrag alum) on bass, Dan Benningfield on keys, Jason Moore (of Nashville band The Katies) on guitar and musical powerhouse Ethan Luck (of too many noteworthy bands to list) on guitar.

Here are a few photos from the set. Everything was taken with my Canon EOS 77D with a 50mm lens. If you want to see more, as always, they’re on my Flickr page. 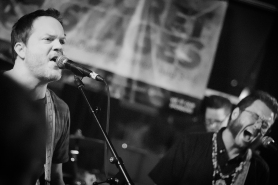 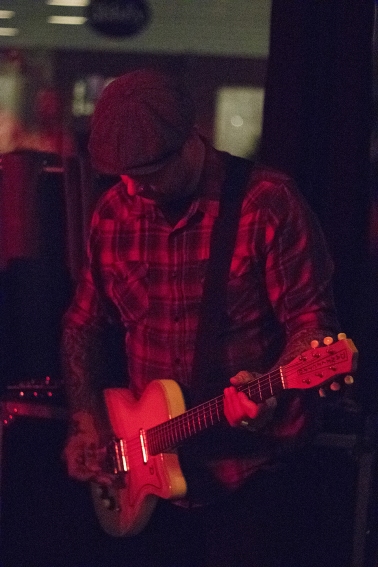 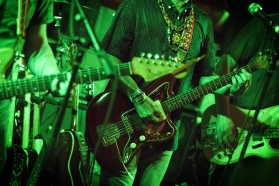 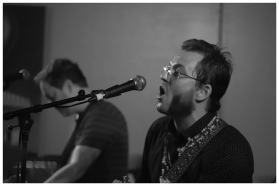 There are a ton of links above but I’ll go ahead and post them all again below and implore you to follow everything if you’re into music or art in general.

After a weekend that consisted of a trip to Nashville for the Full Moon Tattoo and Horror Festival, finishing the Soul Pancake book and finally seeing the original Tron – I think it’s time to get back to productivity mode and present part 01 of my “expert essay” assignment I have given the name “One With the Bee.” Enjoy:

After weeks of being trapped inside my house, I finally decided to go full force up against my enemy. My armor consisted of Doc Martin low top boots, khaki pants and a paint / oil stained, white t-shirt. My arsenal consisted of a broom that was too long for this job and a full can of wasp and hornet spray, I was ready to take on the male carpenter bee. My fear of bees had kept me on the other side of my back door, watching the terrifying beast hovering over the railing of our back deck. Back and forth, over and back again, the hideous creature flew, all the while looking into my eyes, smelling my fear.

Now consider how terrifying it is for someone who is afraid of bees anyway to see the horrible bee going back and forth, never landing, often looking at you and buzzing close to your head when you go outside! Why wouldn’t that satanic buzzing ball of terror land on anything? I would reach outside from time to time and try to spray it in mid air, but it was too fast and too coordinated for my poor aim. For days it defeated me, laughing at me – daring me to come out and agitate it a little more. Well this day was different because I studied carpenter bees all day at work and I knew that the yellow-faced, never-landing psycho that was buzzing around my back porch was a male, and male carpenter bees do not have stingers.

I was suddenly a tough guy.

I took off onto the back porch and began swinging the broom wildly trying to knock down the bee in mid-flight to no avail. He would fly around to the top of the house, then straight down like a spider, only behind me. I’d hear it’s terrible buzz behind my head before swinging around like a mad man, frantically throwing the head of the broom around in the air – again, never touching the bee. I gave up and went back inside.

This back and forth game went on for days before the females finally started to emerge from the holes they had drilled into my deck the previous summer. Sleepy and uncoordinated from three seasons of rest left the females uneasy and clumsy as they would crawl along the wood and try to find the hole from which they emerged. This made them easy targets for the wasp and hornet spray, sending them to the ground, legs kicking like a newborn baby only, you know – dying. The males followed suit, becoming a little groggy from time to time, allowing them to finally get hit with my broom and eventually with my spray.

While I hadn’t defeated all of the bees, there were relatively few flying around after about three weeks of fighting. I took this time to do something I should have done last year and filled in their holes with wood putty. I was a little worried about doing so since they tore through three separate applications of duct tape on their holes last year, but it’s been quite some time now since the holes were filled in and there doesn’t seem to be any sign of those horrific beings. It took some time, but all of the research and effort finally paid off. My wife joked with me and said I had to “become one with the carpenter bee” before I could defeat it. To an extent she was correct.

Also, here are some snaps from this weekend’s festivities in Nashville. I got to meet Malcolm McDowell – Alex, for those who do not know, from Stanley Kubrick’s A Clockwork Orange, one of my favorite pieces of art. We picked up a nice print from artist Nathan Thomas Milliner (www.rebelrouserart.com) of A Clockwork Orange inspired art that I had autographed by Malcolm as well as this beautiful collage illustration inspired by Dario Argento’s Suspiria by artist Joel Robinson (www.artpusher.net). NOT PICTURED: Cannibal Holocaust inspired art, also from Joel:

Me with Malcolm McDowell

Prints picked up at the show

The main reason I started this blog was to force myself to write something every day. And so, for 149 days in a row, I have done just that. Some of these posts have been half-hearted, I realize, but it was never meant to accommodate readers, rather, it was simply meant to boost my creative abilities which were strained if not non-existent for a long time. But it’s back. I think it’s really back, actually.

I was given the opportunity recently to interview one of my idols, Rob Zombie, a task that was difficult for me, mostly because I’ve looked up to the man for more than half of my life, but also because I had never written for a wide-spread publication in a journalistic manner. It was a challenge that I was glad I got to take a part in and not only was I extremely grateful for the opportunity, I was also happy with the finished product and hope to land a couple more stories with them in the future.

As some of you may already know, I finally wrote another song (Only my second one this year), though it hasn’t been recorded yet. Another medium I’m not too experienced with that I was able to better myself in.

Yesterday I submitted another piece of short fiction to Morpheus Tales, a horror publication based in England for their Dark Sorcery special issue. My 4th submission to them, I hope this one makes it. If it doesn’t, I’ll just make my next attempt even better.

My next projects? I picked up some creepy faces that I plan to use as part of a painting and a new kabuki-type mask that I plan on creating my own latex mask from, another medium I’ve never REALLY worked with. And, assuming I can knock this out by September 1, I plan on entering a screenplay in the screenplay writing contest held by the Knoxville Horror Film Festival. I may not win or even be considered for even placing…But I may.

All of this while beginning the first phase of redesigning my workplace’s website, a medium I have quite a bit of experience in but need refresher and improvement with and leaving for California a week from today to continue working on my first full length documentary with intentions of airing it on PBS locally and eventually nation-wide.

This blog may not have caused all of this to happen, or even assisted in it, but it certainly didn’t hurt.

Stay thirsty, my friends…I’m off to go watch the rest of Glee with a hyped up, ‘roid-raging wife.