Fanboy Expo & Scenes From My Favorite Place to Live

While 2014 has definitely been a great year for vacations, it’s certainly not been the year for conventions. Erin and I try to hit several of them throughout the year, especially in the summer, but this year we found ourselves skipping most of them. Days of the Dead in Atlanta looked good as did DragonCon but Atlanta is sort-of “meh” and the latter is expensive. I didn’t realize Fright Night Film Fest in Louisville had moved to October and has apparently (finally) split with FandomFest that was a lame-o show at the first of August. Con Nooga in Chattanooga is a nearby con that’s small but worthwhile, yet we didn’t find a reason to make it this year and one of our favorites, Full Moon Tattoo and Horror Festival in Nashville just didn’t seem that enticing either. What a bummer.

Yeah, I guess Erin’s Master’s program has eaten into a lot of it but it just seems that our attraction to the local shows was waning this year and that’s a serious bummer. Thank goodness for Fanboy Expo in Knoxville, though. They came through the downtown Convention Center not only once but twice this year and brought a lovely show each time. I can’t even begin to tell you how much I love the fact that they’ve left Chilhowee Park behind for the convenience and beauty of downtown Knoxville. The space is bigger, the location is more convenient and it just seems like an overall better show. The place was bustling with vendors of all kinds from phenomenal artists to jewelry makers to comic collectors to collectable toys to junk toys and t-shirts all, with the exception of a few, neatly arranged into nice aisles. We picked up some art and jewelry and snapped some photos of some of the great cosplayers in attendance, including a Cecil and Carlos of Welcome to Night Vale, Freddy Krueger, Mr. Wrestling X, Thorin Oakenshield, a slew of Star Wars characters, several Harley Quinns and a number of (all female) Jokers. Some others I noticed included a female Ash of Army of Darkness, an entire group of X-Men, Charlie Chapman, Ramona Flowers, and a countless number of anime characters I don’t know and other people I simply didn’t recognize.

I asked Erin if the fact that I didn’t recognize the majority of the cosplayers meant I was quickly falling out of touch. She said no. That’s cool.

I suppose the highlight of the day (For Erin, at least. Mine was seeing Ramona Flowers skating through the crowd, though she did not tell me I was having a dream.) was getting to meet Rodger Bumpass, the voice of Squidward on the oddly brilliant Nickelodeon classic Spongebob Squarepants. Squidward is Erin’s favorite cartoon character and she had taken the time to create a nice illustration of Squid and herself together for him to sign. He was very polite and was genuinely impressed with her work and I have to say: even I had a hard time containing my excitement when I heard the man speak – unreal!

As usual, here are some photos but you can see all I took today on Flickr: 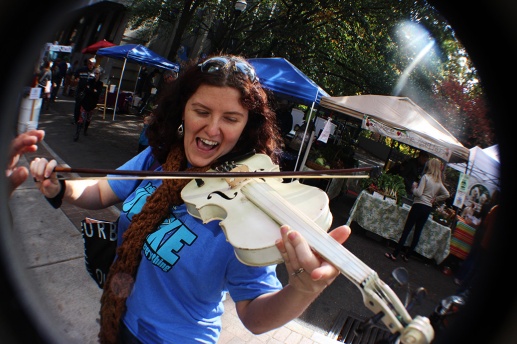 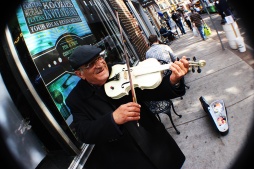 Anybody know who this is?

I certainly hope you took notice of the fiddling man above because I think I’ve found a new favorite busker in downtown. This gentleman was happily playing his white violin for the passersby and after tipping him he let Erin attempt to play his song while he sang. Apparently there were no real words but it simply did not matter. We listened to him play and sing for the Farmer’s Market attendees just outside of Rococo Boutique while we enjoyed some Good Golly Tamale. It was a damn-near perfect lunch!