So much gets me down anymore. I’m an extremely blessed, extremely thankful and extremely happy guy but when I dwell on the news of murderous, racist police offers attacking with impunity, I get bummed out. When I think about collegiate athletes raping young women, the news getting out and society at large, especially the local community, are so willing to turn their heads or jump right into victim blaming all in the name of making it to a bowl game, I get pissed. Or professional footballers getting away with domestic abuse while the heads of the league twiddle their thumbs and practically show their female fans they mean nothing to the league but dollar signs. Sometimes at the end of the day I’m left with nothing but pure outrage and a broken heart.

It isn’t healthy to ponder this stuff as often as I sometimes do and so I like to indulge in the few things that do the total opposite for me. One of them being shopping. Another: spinning records in the den. Another: being active. As an early birthday present Erin got me a membership at the local Title Boxing Club and I’m about to jump out of my skin I’m so excited. Also: technology. I recently bought a Raspberry Pi and I’m very excited to begin working with it in the coming weeks. Finally: FOOD. But you all already knew that.

With that reasoning one could argue that my monthly Mantry subscription is, indeed, healthy for me. And I’d support that argument. This month’s theme is Leftovers and is meant to assist in the upgrading of one of a man’s favorite things: Thanksgiving leftovers. The cold turkey in the fridge next to the potatoes. The cranberry sauce chilling out next to the pumpkin pie. While a couple of days ago I mentioned that I have the turkey and the pie, our Thanksgiving is far from traditional and our leftovers were minimal, but that doesn’t mean I won’t make good use of this month’s goodies. Let’s dive in! 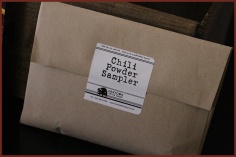 The back of the booklet that came with this month’s box illustrates a usage idea that incorporates the “Ragin’ Rooster” Sriracha Mustard, the Spicy Maple Bourbon Pickles, the Maplewood Smoked Bacon, what appears to be avocado and “leftover” cranberry sauce and turkey on two slices of thick bread all coming together to form the Ultimate Thanksgiving Club Sandwich. It looks heavenly. If I buy the items to make this sandwich is it cheating since I’m not using true leftovers? I guess no one has to know.