I meant to write this post a week ago today. I messed up. I’ve not written a post in over a month.

Last week was a big week for me regarding the reboot I started last July and the weeks and weeks of follow-up posts I made on the subject. To summarize: I got diabetes, did a juice fast, changed my eating and drinking habits, started training for a 5k and going to spin class twice a week. By my follow up in October, I got my health back in order and made some long-term changes in how I live. My first 5k was The Knoxville Hot to Trot 5k on Thanksgiving day, 2014. I started boxing at Title Boxing Club at the end of November and have since ran Calhoun’s New Year’s Day 5k on January 1, the Zen Evo Chocolate Lover’s Valentine 5k on Valentine’s Day, the Barley’s St. Patrick’s Day 5k on March 15, and, finally and most recently, the Covenant Health Knoxville Marathon 5k last week. 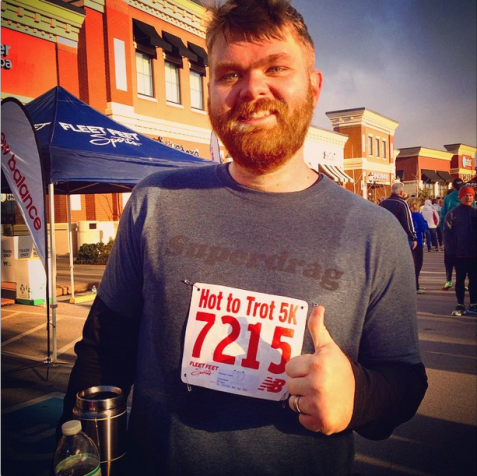 This last 5k was great for several reasons: first, it was my best time to-date. Before Sunday my best time was Valentine’s Day with a chip time of 33:28, averaging 10:56/mile but the overall distance was just a shade under 5k at 3.06 miles. Sunday’s 5k gave me a chip time of 33:39 but my average pace was 10:36/mile and overall distance of 3.18 miles. I was very happy about that! Next, it was nice to be a part of the biggest race in town. Seeing a few thousand people lining up by World’s Fair Park was incredible and being able to run with most of them is always a great part of these races. Next, I got to be inside Neyland Stadium for the first time, something I was told I had to do, and finally, it was a great way to start a day of celebration.

Proof I was in Neland Stadium after the Covenant Health Knoxville Marathon 5k, March 29, 2015

Okay, so what are we celebrating?

Over the weekend last week I hit a milestone: 40lbs lost since my reboot journey began. No fads, no crashes, no surgery, no pills, no excuses – just pure motivation, hard work, and a whole helluva lot of griping and complaining. Hitting 40lbs down was huge for me so since I already had the 5k scheduled for the weekend I figured I’d use it as part 1 of a 3 part celebration on Sunday. When I crossed the finish line at the 50-yard line at Neyland I wrapped up part 1. I had a long walk back up the Cumberland strip back to the car and was home by 9:30AM. Three hours of rest before part 2…

…at Title Boxing Club, Knoxville for the first annual T-75 class. Like I said above, I started going to Title at the end of November last year and have been in love with the place ever since. I’m there at 5:45am three days a week for the power hour consisting of 15 minutes of body-weight exercises and stretching, and then 8 3-minute rounds on the heavy bags with 60 seconds of active rest between rounds, and then finishing off with 15 minutes of core exercises. It’s been an awesome thing for me, allowing me to drop the 5 pounds I gained over the holidays and then 10 more after the fact and has assisted me in toning up considerably – I’ve lost 4 belt notches total!

So T-75 was a Sunday afternoon class modeled after the Power-Hour only the class is 75 minutes long and consists of 12 3-minute rounds on the bags instead of the traditional 8. It was tough keeping my adrenaline going between the race and the afternoon class but I did what I had to do to keep it up. I busted out the warm-up and started strong on the bag until about round 4 when I was completely drained. “You’ve made a mistake and you’re probably going to die” said the voice in my head but I was next to a few people who were saying those things out loud and I wasn’t about to be one of those people. I finished strong and felt awesome, though completely worn down, afterward. Part 2 was over.

Part 3 was the most looked-forward-to part of the day. It consisted of me ordering an extra pizza for dinner so I could eat my 40-pounds-lighter weight in pizza because I had earned it by working so hard during the day. When the pizza got delivered my mouth was watering uncontrollably and got even worse when I cracked open the box for the first pie. I started eating and then…I got full. Like really quick. I barely ate as much as I usually do. My pig-out session had failed. I had wimped-out instead. Boo. Hiss.

I marked the day as successful, though, with the below photo. A few years ago I bought this Metallica “…And Justice for All” t-shirt. I hate 100% cotton shirts because I usually can’t wear the Large size and the XL size is always too big for me, but I wanted this Metallica shirt badly and went for it anyway, size L. I wore it once, washed it, and then accepted it was way too small and I’d never wear it again. After a while I put it in a pile of clothes to take to Goodwill. A few months ago I started bagging those clothes up and found it and left it out thinking “Maybe, just maybe I can get back into this…” After the 12 rounds at Title I slipped into the shirt, comfortably. It was a big day for me, for my body, and most of all, for Metallica.

So what happens now? I’m definitely sticking with boxing and as much as I hate it I’m going to stick with running. After being a part of the Covenant Health Knoxville Marathon 5k I realized that even though a 5k is definitely something to be proud of, ultimately it’s a “baby race” and can easily be forgotten when bigger, better feats are happening. I have no desire to ever run a half-marathon but after some consideration I thought it wouldn’t hurt to train for a 10k so that’s the next physical health goal. I have a plan picked out to help me along that path and I intend to begin it once the SPHL playoffs are over for my beloved Knoxville Ice Bears (and after a killer win last night against Columbus that results in us moving to the second round, hopefully I still have some time!).

I have about 2 more months before my yearly physical is to happen so I’d love to see 10 more pounds go down the drain, my blood pressure better than ever, my liver enzymes to be normal again along with my cholesterol, and be physically fit enough to run a late-summer or early-fall 10k. I’m on the right track – but in the words of Billy Madison upon “trying to score points with the teacher today”: DON’T SCREW IT UP.