Saturday means sleeping in, extra coffee in lieu of a proper breakfast and moving about town taking in whatever my wonderful city has to offer. This weekend that offering was in the form of Marble City Comicon!

While Erin and I still go to the local shows and a few regional ones, I’ve noticed that our attitude at these things have changed quite a bit in the last few years. Call it getting older or interests changing but something is definitely way different. We’re usually not as interested in spending money to see celebrities because we’ve met most all of the regulars at this point and with geek culture getting so “hip” we’re sort-of out of the loop when it comes to folks representing later seasons of Power Rangers, Doctor Who, Supernatural, the Walking Dead and the like. Consequently a lot of the collectables and art cater to fans of these series leaving Erin and I to merely guess at a lot of it or, more often, make bad jokes at their expense.

We still love the shows, though, and attend any that we can, especially the local ones, just to support a scene we care a lot about. I’ve grown quite fond of carrying along the DSLR and shooting the cosplayers at these events, which is what I did this weekend.

A few of those pictures are below but I have several more you can see over on Flickr. These were shot with my 50mm lens. 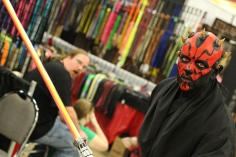 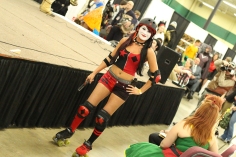 We stuck around for the costume contest and Erin bought a few pieces of jewelry. It was definitely a great show this year with more venders, artists, cosplayers and overall attendance than I remember seeing at this particular one in a while. Props to the organizers of Marble City Comicon for a great show and giving Knoxville a show they can, and should, be proud of!