Thanksgiving in Florida Pt. 3: Ripley’s Believe It Or Not, St. Augustine

If you’re a weirdo that’s been following along for over a year you’d know that last October Erin and I visited Ripley’s Believe It Or Not! in Orlando and publicly announced our mission to visit each of the Ripley’s locations in the world (19 in the US, 32 total worldwide). Here’s where you’re thinking I’m going to say there just happened to be a Ripley’s in Largo or Clearwater, Tampa or St. Pete, but you’d be wrong. Actually the closest Ripley’s to us NOT in Orlando is located in St. Augustine and so we went.

Nevermind the fact it was a cool 3+ hours away on the Atlantic side of the state…This is Ripley’s and we’re serious about this shit.

Ripley’s Believe It Or Not! in Saint Augustine, we were told, was the first Ripley’s Odditorium in the United States. Further research has taught me that it’s located in the Castle Warden, a winter home (read: mansion) built by millionaire William Warden in 1887. It would later act as a hotel where Ripley, himself, once stayed. After Ripley’s death in 1949 the castle was bought and in 1950 the first Ripley’s Odditorium was open for business. It remains a beauty of a place (though it’s rumored to be haunted) and is now home to Red Train Tours, a guided tour of the restaurants, shopping, and various attractions around St. Augustine, and Ripley’s Ghost Train Adventure, a similar tour experience that features the haunts and other paranormal goings-on of the fine city.

Highlights for me include the many wax figures that included Bobby “The Crocodile Man” Blackburn, Ching “The Blue-Faced Man” Foo, Walter “The Sixth Heaviest Person in Medical History” Hudson, “The Skeleton Dude” Eddie Masher, and Johnny Tong of Venice Beach, CA, “The Snake Charmer”. The artwork inside was phenomenal and included a portrait of Elvis made from candy, a portrait of Freddy Krueger made entirely of Twizzlers, a lovely portrait of John Lennon “drawn” with soot, and a fabulous depiction of the great Frank Sinatra made out of crayons. Everything inside is what you’d expect from a Ripley’s Odditorium and then some, with many original art pieces by artists around the world as well as Ripley, himself, brain-teasing puzzles and illusions, and mind-blowing facts that ranged from how tribesmen prepare crocodiles for their village to how to properly swallow a sword! Fancy!

Anyway – I’ve posted some of my photos below but if you want to see them all, please help yourself over at my Flickr Stream 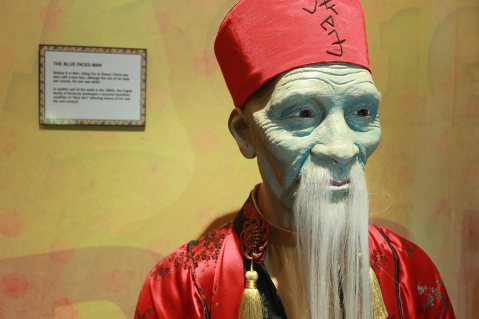 Eat It or Not! 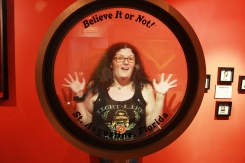 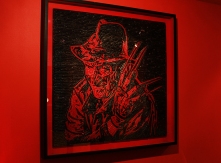 Freddy portrait made from Twizzlers

In the parking lot, this horse was made from scrap metal 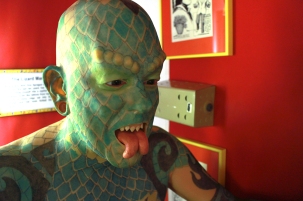 Frank Sinatra made entirely of crayons

And in case you still need proof we were really there: