After two Title Boxing Club Power Hours, some weight-lifting, a very short run, and eight hours of desk-sitting at the office, I was already convinced our plan to make the four hour drive to Charlotte after work was a bad idea. I was already tired and the thought of being on the interstate for four hours, half of which would be completely dark, made my eyes feel heavier than they already were. We stopped about halfway for a quick bite and bathroom break at a shady Burger King out in the country in North Carolina. They didn’t put cheese on our Whoppers and the bathroom smelled like piss. A man collecting crushed aluminum cans out of his back seat and trunk bumped into me while I was getting in my car. My GPS took us into South Carolina where we passed the Peachoid in Gaffney, but another hour later put us in downtown Charlotte at Le Méridien Hotel. It was 10:30, we were super tired, but we’d made it. We were officially at the host hotel for Mad Monster Party 2016!

Well, sort-of. We were staying at Le Méridien but we parked at the Sheraton. We didn’t realize it was two separate hotels connected by a maze of hallways and ramps. Just a bit of confusion but we made it work. After lugging our gear to our hotel through the Sheraton labyrinth (read: the long way) and attempting to check in at the wrong desk, we were finally comfortably in our room for the night. The hotel is gorgeous and everyone from housekeeping, the servers at the restaurant Evoke*, to the room service, to the front desk folks, and even the maintenance man was extremely friendly. For real, everything was spiffy and our stay was pleasant despite the horrific stories written in their Google and Yelp! reviews. 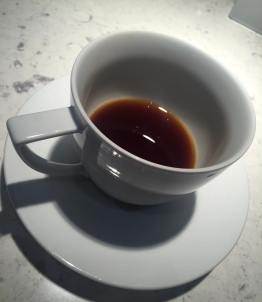 *The employees of Evoke were very nice but their menu, its prices, and what was actually delivered left a lot to be desired. I spent $17 on an order of Eggs Benedict that actually tasted great, but were served atop English muffins because they were out of cornbread (the main reason I ordered it in the first place), and the poached eggs were overcooked and were basically soft-boiled eggs. I also paid nearly $5 for a small cup of plain black coffee**. I guess I’m the sucker***, but still…

**I’d later find out coffee was being served for free 20 yards down the winding hallway in the lobby of the Sheraton.

Breakfast aside, we slept very well. The show opened at 11:00am and boasted of vendors from all over the country selling artwork, t-shirts, jewelry, toys, stickers, pins, movies, memorabilia, and even taxidermy. Notable guests in attendance included Wednesday 13, Dee Wallace, P.J. Soles, George Romero, Nivek Ogre, Bill Mosley, Derek Mears, Malcolm McDowell, James Duval, and Jeremy Bulloch. I’ll say that the reason we wanted to attend this event was to see the great Paul Sorvino with hopes of getting a new autograph on my Repo! the Genetic Opera poster, but he had to cancel the week before the event. We’d already gotten our tickets and booked our room, so we sucked it up and made the trip anyway, despite not really wanting to see any of the celebrity guests.

There was very little lost, though. We surfed around the vendor room and picked up a few things – a few stickers, a t-shirt, a pin, a hockey puck, and an ornamental human skull replica – and chatted with some of the vendors about their art. We also attended panels by the cast of What we Do in the Shadows and the great George Romero, attended an auction to benefit Scares That Care, and finally, the costume contest.

Speaking of costumes, I’ll say what I was most impressed with was the amount of cosplayers. The horror conventions we’ve attended in the past do often involve a small amount of cosplay, but this event had not only a larger number of participants but some quality participants! Several homemade costumes made their rounds, often completely original characters or original takes on famous ones, others put together with the help of great references and lots of expendable income. Below are some random photos of cosplayers that didn’t really turn out great but I wanted to share anyway**** 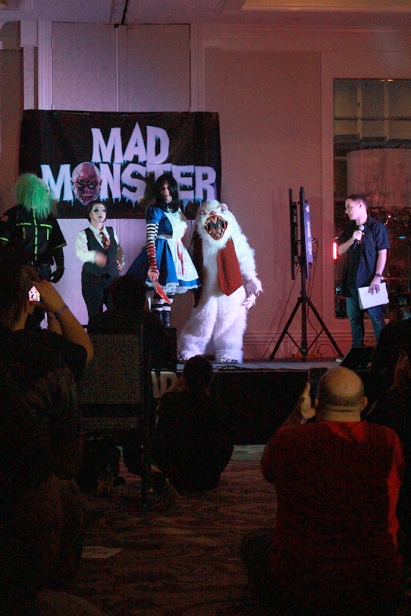 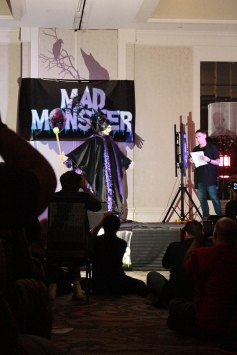 ****One gripe was the costume contest was extremely difficult to photograph. When we tried to get good seats for the show we found out we were sitting in “RIP” Reserved seats so we had to move back. I grabbed an aisle seat as close as we could but we were too far back to capture any detail without my telephoto attachment. Also, for some reason, they turned the ballroom lights out and lit the costumes with various colored LED spot lights that were on stage. It looked fun, yeah, but hardly desirable light for a costume contest.

In the end, Mad Monster Party should be considered a success. We didn’t get to see the one celebrity we wanted to see, yeah, and we only saw 1 of the 4 friends we were hoping to run into, yeah, but it was still a good time and, though I didn’t realize it, was Erin’s first time in the city of Charlotte. I think the organizers have put together a fine show and the venue gets the job done pretty well. We’ll definitely make it back to Mad Monster, but only if their guest list outdoes my personal favorite (and unfortunately scheduled the same weekend) Full Moon Tattoo and Horror Convention.

Next up: Marble City ComicCon in April!

Or, I guess next up: half marathon, but I mean, who really cares about that?