I mentioned last week that I took a 2 hour nap after the race. I curled my legs up and when I woke up, I stretched them out and immediately felt an excruciating pain in my left knee. My knee hurt the rest of the afternoon and evening, right along with my feet and ankles. Whatever, I had just ran 3.1 miles farther than I’d ever ran in my life, soreness and pain is expected – earned, even – so I toughed it out. I taught the 5:45am class at Title Boxing Club Knoxville the very next morning and while my movement was limited I was able to make it just fine. The knee pain had already disappeared.

My feet and ankles were sore for the next 4-5 days, which made me feel like a serious wimp, but to be fair, I didn’t really give them a break as I put in 4 classes at Title over the next week so they didn’t really get a proper break. The important thing is my knee pain had disappeared. Right?

This week I put in 5 classes at Title and during my first one, Monday morning, my knee magically stopped working. After a week of no knee pain, it suddenly returned. It’s Sunday now, seven days later, and it still hurts. The pain comes and goes but the fact remains that when the pain comes, it hits hard.

This is a problem because, if you haven’t already noticed in my side bar, I’m now 21 days away from my next “race” – Mudder’s Day Madness 5K. Can’t hurt since it’s a month after my half marathon but my knee being such a punk is starting to freak me out. Is it smart to do a 5k mud run without running for a full month? I’m hoping I can get a few training runs in beforehand but right now I’m half afraid of running on my knee. I guess we’ll see…

I also guess we’ll just treat that last paragraph as my official announcement that I’ve registered for the Mudder’s Day Madness 5k in Maryville, TN next month. It will be my first mud run and it sounds like I’m going to be doing it with a small group of awesome friends. I guess the good news is that if you’re dredging through mud, wading through streams, crawling, and climbing, your running skills aren’t going to be front-and-center. Fun is the name of the game and I can definitely do that, bum knee or not!

Not sure if I mentioned it in the blog but I intended to do lots of yoga during the month I wasn’t running and in two weeks I’ve successfully completed a yoga session one time. It was awesome and I really enjoyed it, I just…Can’t seem to make myself be still for more than a few minutes at a time. I think yoga would do me a lot of good if I worked on it over time.

One last fitness-related thing to mention: I don’t think registration is even open yet as the race isn’t until next year, but I’ve agreed to do a Sprint Triathlon with my friend Debby that I worked with at the Baby Farm. With that said, be prepared to hear lots about some bike training and swimming in addition to running probably for the rest of the year. It’s kind of pathetic but I’ve told my friends I’m not worried about the run, not worried about the biking, not worried about the swim…But I’m already stressing out about what I’m supposed to wear for the swim. It’s a Sprint Tri and the swim is going to be in a pool, so it would be ridiculous to wear a full-on wetsuit like you’d wear during an open swim. It would also seem amateur (and likely frowned upon) to wear board shorts or typical swimming trunks. My research has told me that men often wear Speedos for this (of the shorts variety, not necessarily the brief variety) which is fine but that’s still just so weird for me. I’d be more comfortable doing the swim naked than wearing one of those things.

On the positive side, that’s motivation to continue working on my core and make sure I don’t let my gut hang over like it used to ever again. On another positive: I’m planning on getting a tramp stamp in the next month or so, so wearing one of those Speedos is going to suddenly be much cooler with a classy tramp stamp to accompany it. I’ll be lucky if they even allow me to race…

One more one last fitness-related thing to mention: Last week Title Boxing Club Knoxville was featured for local news station WVLT’s “Workout Wednesday” segment and they chose to come to my 5:45am class and reported LIVE from class! Reporter Sara Mitchell was on the scene and I was sure to bring the pain. She toughed out the warm up, the rounds, and the core like a champ and made us look good for the local viewing audience. You can see the live segments as well as the portion they edited for air later here but here are a few photos from the morning’s shoot: 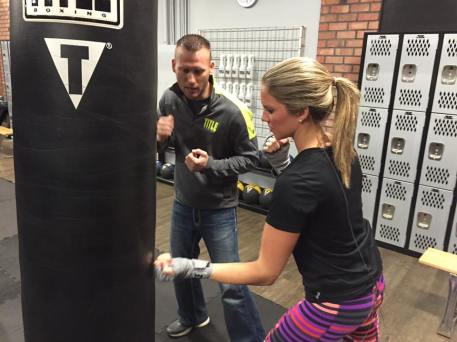 I have a few other things to ramble on about that aren’t related to fitness, so I hope to share that with whoever’s listening over the next few days. Until then, party on, Wayne, and try to do some friggin’ yoga for Pete’s sake, man…