When I went in to get my tramp stamp, I wasn’t entirely sure how I would have to be situated in the chair for Rob to make it happen. When he reassembled and moved around the chair for my session it was clear that I was to sit backwards in the chair like the cool kids used to do in the 90s, only I’d have to earn the “tramp” title and stick my ass out and arch my back, leaning forward on the head of the chair. If it’s hard to visualize, it looked like this, actually:

Sitting like this wasn’t awful…at first. Unfortunately my jeans were so tight that having to stretch across the chair like that put a lot of pressure on my hips and it made my left leg ache for most of the time. I had to take a break every half our or so to re-situate myself and relieve the ache if only for a moment or two. Erin aggravated me that I wouldn’t be having this problem if I weren’t wearing “David Bowie jeans.”

Truth is, all of my jeans are slim-fit and have been for the last year or two – ever since I was able to wear them. Anyone who’s followed my blog for any amount of time will know that my fitness and physique have been a big part of my life for the last few years and being able to wear slim-fit ANYTHING was a big deal to me – something I’m quite proud of.

Something else I’m quite proud of is that when I started this journey, I was fitting snugly in a waist size 38 in Old Navy’s Boot Cut jeans. Slowly over time they got looser and looser and my belt started getting a little tighter. I eventually got back into size 36 in the Boot Cut and continued to shrink. I graduated to the 36 slim fit and fell in love with my progress. At the time, I had lost 4 belt notches and was quite happy with where I was. In fact, I wasn’t sure if I could physically go down anymore. I wear my jeans pretty low and my hips are rather boney, even when I was wearing the 38s, and I have no backside to speak of. Still, after some time, those 36 slims were getting very loose on me and I couldn’t tighten my belt up any more without making the jeans bunch up, so it was about time to come down to 34s.

Yet I held on to the 36s for a while longer because when I made the revelation that I could potentially go down to size 34, I had literally just bought four new pair of jeans in size 36. I kind of like my jeans to be a little loose in the waist and am quite comfortable with them riding down just a bit, so everything was gravy.

Until my favorite pair started forming a hole in the crotch. I knew this day would come because this was actually not my first pair of the faded gray jeans from Old Navy I’ve busted in the crotch. It wasn’t my second or third pair either. This was, indeed, my fourth pair of Old Navy’s faded gray jeans that I’d busted over the last several years. No other jean I’ve had has suffered in this way because I just won’t wear any other jean as often – these have been my favorite for years and continue to be. So it was finally time to make the leap.

Yesterday we ended up in Maryville trying to hunt down a rusty marquee letter H from Michael’s to finish spelling out “FREAKSHOW” for our Halloween home haunt this year. Our local Michael’s was missing the H and we’d look pretty dumb without it (though now that I think about it, FREAKSOW would be pretty interesting – like a traveling show depicting deformed performing pigs..) 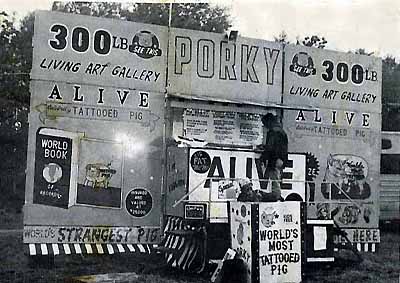 We struck out on the H but won big at the next door Old Navy where I found my gray jeans in size 34 slim ON CLEARANCE. Bad news considering this probably means they’re going to be taken away for the season (or longer) but great news for me in that I got my favorite jeans back for $8. I didn’t want to be cocky and just buy them without trying them on first, so I headed to the fitting rooms for the ultimate moment of truth.

And it was there in the fitting room of the Old Navy in Maryville, Tennessee, that I poured myself into my newest pair of “David Bowie pants” – the first pair of size 34 jeans I’ve worn since – no shit – probably middle school.

The one caveat at this point is that no matter how much more I shape up, trim down, or otherwise get fit, this is likely the smallest my waist size will ever get. Not because I don’t think it’s possible for my waist to get any smaller, but because…I run…And never skip leg day. I don’t have giant quads (or bread loaf quads like my spin instructor GymKatie has), but they’re definitely large enough now to say “enough” in this slim jeans.

Of course, one could easily say “You don’t have to wear slim jeans…” And to that person I say…

I’ll leave you all with a picture of my dinner last night. We stopped by Dead End BBQ in Maryville and split the sampler with George’s Competition Chicken (multi-award winning single-bone chicken thighs served over Texas toast), smoked sausage, brisket, buffalo fried okra, beans and sausage, macaroni and pimento cheese, and jalapeño cornbread. Dead End BBQ ain’t playing no games and neither am I – I had this for dinner AND got my first pair of size 34 jeans on the same day. Dreams do come true, weirdos!