On this day in 2001, another piece of punk rock died. 9 years ago, Jeffry Ross Hyman, otherwise known as Joey Ramone, passed away after a 7 year battle with Lymphoma. The Official Joey Ramone Site states that Joey’s was “the Voice that Launched 10,000 Bands,” and I think it’s still an understatement. Or, if not, one of many, many important aspects of our lives that he either ignited or at least touched in some way. Joey Ramone and the Ramones were the epitome of punk rock, yet were a band that helped form rock’n’roll as we know it today. 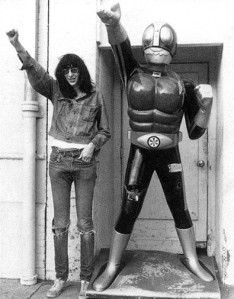 I remember listening to “Blitzkrieg Bop” when I was little, the first Ramones song I had ever heard, on the radio. I didn’t know what they were saying, but I didn’t even care. All that mattered was that it was rock’n’roll in a way I had never heard it and my ear for music wasn’t the same afterward. I had just heard the basic hits, “Blitzkrieg Bop,” “I Wanna Be Sedated,” and “Rock’n’Roll High School,” mostly because that’s all they played on the radio. The Airheads soundtrack included “We Want the Airwaves” and when I made it to high school, I finally reached Ramonesmania! I picked up the debut album on CD at the used CD shop and was blown away by “Now I Wanna Sniff Some Glue,” “Beat On the Brat,” “Judy Is Punk,” and “Havana Affair.” The only other punk albums I can listen to on repeat like this one are “Give Me Convenience Or Give Me Death!” by the Dead Kennedys and “Static Age” by the Misfits…A total classic. Along with the steady beat of the drums, running bass lines and buzz saw style guitar, Joey Ramone’s distinctive vocal style was the perfect compliment to the energy and style of the music.

A great thing about the Ramones is how you can fall in love with them numerous times. Just when I thought I was losing interest in them, they include “Now I Wanna Sniff Some Glue” during an awesome scene in Rob Zombie’s House of 1000 Corpses and all the sudden, I’m a mega Ramones fan again. I only regret that I never got to see them live (I have friends who saw them play with Rancid at Lollapalooza once). I have 2 of their live albums and a ton of live footage on DVD and am terribly upset that I was denied the opportunity to see them, even if it meant seeing them with CJ and not Dee Dee (which isn’t a terrible thing, I actually liked CJ as well). The feeling I get when I hear the Ramones is unlike the feeling I get while listening to any other band, and I never get tired of it. And without Joey’s unmistakable voice, it just doesn’t work as well.

It’s said that when Joey died, he was listening to “In a Little While” by U2, so I’m including that song along with some of my Ramones favorites. Enjoy!