The older I get, the more I hate the snow. As a little one, the thought of actually having to drive in the snow, the dangers it created and how much of a general pain in the arse it is never once occurred to me. Now an adult, I’ll be honest, the more mild the winter, the better for me. I hate being out in it, I hate the thought of Erin being out in it, and after taking my old CR-V out in the snow a couple of years ago and not being able to make it up my own driveway sort of hurt my feelings.

One thing that’s not changed, though – is I still LOVE snow days. When they announced we were getting out of work early yesterday afternoon because of the increasingly dangerous conditions, I was magically whisked away to the days of Sullivan County schools being let out at often the first flurry in the sky. Sure, I was going to have to just remote in and work from home, but there’s something exciting about getting out early.

Leaving for work in a half-daze, I had forgotten to lay something out for dinner. We struggled with the decision of whether or not to order a pizza the night before (we didn’t) so the thought of pizza immediately filled my mind. But would I dare get the Domino’s guy out in the weather I, myself, didn’t even want to be in? Nah. As I took the exit to Target to pick up a frozen solution, the snow had picked up to the point of making it hard to see. I sighed, passed the entrance and began racking my brain of what was left in the kitchen for dinner at home.

And sometimes just being put into a stupid situation with no preparation helps us make better decisions anyway. Such was the case last night.

Don’t want to go in the store to pick up a frozen pizza?

Then Make Your Own Damn Pizza!

I often don’t make my own pizza at home because I’m rarely in the mood to wait for good dough to rise. Thanks to one of my favorite food blogs, Budget Bytes, I was able to find a great scratch-made pizza dough with relatively few ingredients, all of which I already had in my kitchen. After about 20 minutes, I had a ball of dough in a bowl with a wet towel over it, ready to rise. Our situation had suddenly gotten better.

I was strutting around the house for the next hour or so, thinking I had saved the (snow) day with dinner. All the cheese we had in the house was a pack of shredded Mexican blend, which if you didn’t know already, usually sucks hardcore on a pizza, often coming out sweaty, in my opinion. “Easy fix. Just make a cheeseless pizza!” Man, I’m smart. I figured since the toppings I intended to include were chopped bell pepper and mushrooms, it wouldn’t hurt to go full-blown vegan and go cheeseless, also. My ego boost was bit premature, however, as the thought of sauce hadn’t quite crossed my mind.

I mean, it kind of did, but I had intended to just top it with a jar of pre-made sauce I was sure we had…

So I once again decided to put a little bit of effort into dinner and made my own pizza sauce with a jar of canned tomatoes my father-in-law had given to us some time ago. It was rocking, and made enough sauce to make a nice leftover spaghetti lunch today! Everybody wins!

So, here goes my pizza:

1) I put together the ingredients for the dough with instruction from Budget Bytes and let the dough rise for nearly two hours (one hour should be good, I was just waiting a bit for dinner).

2) The amount of tomatoes in my jar equalled about 4 cups worth. I only needed about 2 for the pizza, so a 15oz can of crushed tomatoes would probably work just as well – just cut the rest of the recipe in half. I dropped the entire jar of tomatoes into a medium sauce pan and added 1 teaspoon basil, 1 teaspoon oregano, about 3 Tablespoons minced garlic, 2 Tablespoons apple cider vinegar (you could also use red wine vinegar), 1 teaspoon salt and pepper to taste. Stirring frequently, I heated through while I cooked my veggies.

3) I sauteed 1 chopped bell pepper and a carton of sliced mushrooms over medium heat in about a Tablespoon of canola oil for about 6 or 8 minutes.

4) While the veggies and sauce cooked, I stretched my dough out onto a perforated pizza pan and brushed a thin layer of extra virgin olive oil across the top and shook some Italian seasoning on top of that.

5) Once the veggies were finished, I spooned about 2 cups worth of the sauce onto the pizza and topped with all of the veggies. I then baked in a 450 degree oven for about 12 minutes. Finally, I brushed a little bit more olive oil along the crust after coming out of the oven. 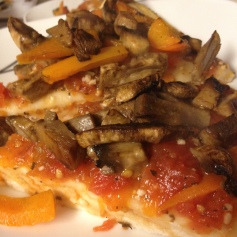 So what to do with the remaining sauce?

I refrigerated it over night and for lunch today, I boiled up two servings worth of whole-wheat spaghetti for 8 minutes and reheated the sauce in the microwave for about 2 minutes. After draining the pasta, I put it back in the pot and poured the sauce over it, mixing in a few shakes of parmesan cheese and tossing together. After portioning the pasta and sauce into two bowls, I topped with a bit more parmesan and a few shakes of parsley for a healthy, tasty and homemade lunch!