Well, if you thought that Burger Specials like The Queso Burger, The Bacon & Egg Burger and The Pimento Cheese Burger were all our Food Network Kitchen were all about, you’d better go ahead and think again.

Along with the weekly burger special the kitchen has provided us with a weekly sandwich special. Sandwich selections have been fine, I guess – a little pesto here, a little salami there, but after the last couple of weeks it has become apparent that our sandwich station has grown some serious balls. Two weeks ago – the same week as the Pimento Cheese Burger – the kitchen introduced the deep-fried peanut butter & jelly sandwich and it’s quite embarrassing to admit that I didn’t make it down to that meal even though Allison and I were hardcore keen on getting down on it. I wasn’t about to miss another great sandwich special, though, and I made sure of it by doing it on Monday!

Yes, today’s sandwich special was the Fried Mozzarella Cheese Stick Grilled Cheese sandwich and it’s exactly as awesome as it sounds. Served with a side of marinara sauce, this sandwich included four large fried mozzarella cheese sticks sandwiched between slices of American cheese which was again sandwiched between two slices of buttery wheat bread and then seared up on the panini press until everything was oozing with sexiness. The group of three all got the sandwich and each gave it an A+ and an “I’d eat it again” review. Heck, I was ready to eat another later that afternoon! 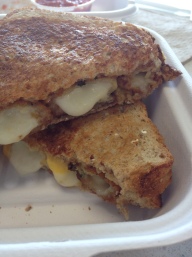 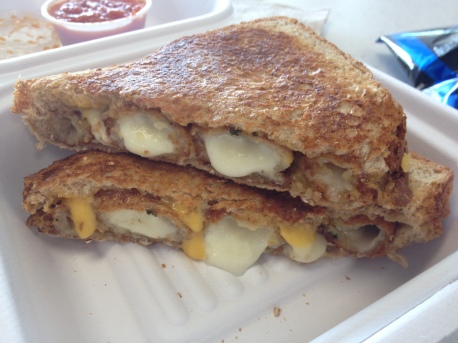