Anybody remember last year’s Thanksgiving dinner that I also told you to stuff?

Well, we’ve done it again. For about the 3rd or 4th year running now the Simpsons have turned the traditional Thanksgiving holiday upside down by sticking to Knoxville, staying indoors and firing up some tasty turkey treats and watching scary movies. We’ve done turkey tacos and turkey Italian sausage dogs in the past but this year we’ve gone a little further.

The idea came to me when I got an email alerting me of a new post at BudgetBytes.com for BBQ Bean Sliders (that I’ve still not made) – always looking for a non-traditional Thanksgiving dinner that still includes turkey in some way, this post really gave me the inspiration I needed to put together this year’s dinner.

I started out with some turkey thighs – 4 total – that I seasoned with salt, pepper, chili powder and basil and dropped in the slow cooker with a stick of butter for 8 hours on low. After moving the super-tender turkey to a cutting board, I used two forks to “shred” the turkey, then placed it back in the slow cooker with a bit of the liquid (I emptied most of it) just to keep it moist. Since I wasn’t sure how much turkey this would yield I just made all of it and ended up with a LOT leftover – I’d cut this in half if you’re only serving two people. I’ll explain later.

I also wanted to make my own barbecue sauce but hadn’t really research any new sauces when my girl Giada put a cranberry barbecue sauce recipe in my face. I’d link to this post but I modified it quite a bit based solely on items I had in my kitchen at the time. We begin by making a cranberry sauce – boiling together some maple syrup, 1lb of cranberries, about a half cup (I eyeballed it and probably used 3/4c) and some cinnamon then simmered for about 5 minutes before mashing with a potato masher to make a sweet, fruity and chunky cranberry sauce. This tasted lovely by itself.

I moved the sauce into a new saucepan then sauteed a diced onion in the old pan with about 2T of EVOO. Once sweated for about 5-7 minutes I poured in a cup cranberry sauce with a few drops of worcestershire sauce, vinegar and about a half cup of ketchup, brought to a boil and simmered for another 5 minutes. Once the sauce was finished cooking, I transferred to a blender and processed until it was smooth. This made a surprisingly small amount of sauce.

I poured one cup of the sauce into the cooked turkey and mixed together and found that the turkey hadn’t really changed color at all – for this to be Cranberry Barbecue Sauce my turkey wasn’t looking very cranberry or barbecue by any stretch of the imagination. In an attempt to remedy this I just dumped in the remainder of my cranberry sauce and mixed. Still very little color save for the chunks of cranberry I hadn’t mashed completely.

This was a bummer but the taste was wonderful. I topped some toasted King’s Hawaiian dinner rolls with the turkey mixture and placed them beside some baked sweet potatoes I topped with butter, brown sugar and marshmallows I then roasted to brown. 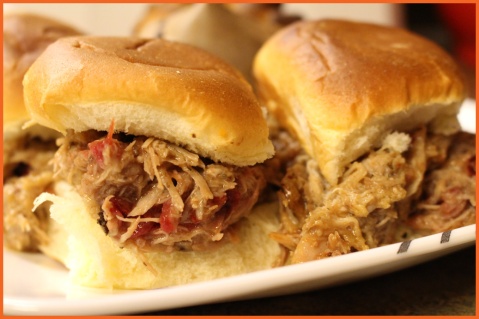 In the end everything was super tasty just not as sexy looking as I was hoping. Giada’s beauty shot of cranberry barbecue came out much more vibrant and pink. While I’m confident my sauce was correct, I think my problem was too much turkey – if cooking for only two like I did this year, I would stick with only two turkey thighs or at least double the sauce recipe.

I ended up having a large tupperware dish full of leftover turkey and sauce. For lunch on Black Friday I toasted the remainder of my dinner rolls with the turkey mixture and topped with a basic gravy I made from butter, flour and beef broth then melted some shredded cheddar blend to form a makeshift, unofficial “Hot Brown” for the two of us and I STILL have leftover turkey.

While I made it 18 days into NaBloPoMo, I stalled out for a very good, though stupid, reason that maybe I’ll blog about in the near future. I mentioned some “big news” a few weeks ago but go ahead and scratch that. No news. Bummer. Life goes on.