I spent most of my formidable years thinking I was “Mr. Punk Rock” and wouldn’t be caught dead listening to crap music, wouldn’t be caught wearing Abercrombie, Hollister, American Eagle or Tommy. I would never work for “the man”, I would always “fight the system”, I would never subscribe to the lifestyle of the average corporate yuppie. Part of the “punk” mindset was to be true to yourself: an individual that saw through the BS that was “The American Dream”: money, a family, a nice house, yearly vacations at the beach, church on Sunday mornings.

But one thing I’ve learned recently is that the meme depicting a gray-headed Ian MacKaye and Henry Rollins with the caption saying something like “Punk’s not dead, it just gets older and goes to bed at a more reasonable hour” is true. I’ve also learned that while the “punk” mindset and attitude weren’t things I made up or imagined but are characteristics I have to this day, I also now realize that the “punk look” was just a fashion statement that made us part of the same movement as everyone else, therefore going against what we all claimed to be for (against?). Once I grew up a bit and learned that I like being able to pay my bills, I don’t mind kissing a little corporate butt, like having a small family, like going on vacation every year, I also figured out that as long as the mind was intact and don’t waiver on this fact, one can still dress sharp and get away with it. Also: Punk rock and its fashion are stupid.

If you’ve known me for any amount of time you’ll know that I love clothes – shopping for them, looking at them, talking about them, reading about them. I creep on a lot of men’s fashion blogs including, but not limited to, Style Girlfriend, Mr. Porter, Esquire Style, I Am Alpha M and GQ Style and have a select few gentlemen I keep an eye on for style inspiration including Ricki “Fuckin'” Hall, David Beckham, Justin Timberlake and a few guys from the brands owned by the company I work for such as Alton Brown, Drew & Jonathan Scott, the Property Brothers and David Bromstad. If I were to get to meet any of these guys it would be a humbling experience because I’d be reminded of how sloppy I probably look that day. At least that’s how I think it would work and so to confirm, I was given the opportunity to do just that when we celebrated HGTV Day at work last Tuesday evening.

Music was played, drinks were served, hors d’oeuvres were served, people mingled and yes, some of our biggest talent was in attendance to say hey and to pose for photos. I put on my black leather army-style boots, maroon corduroys and a mid-tone blue button down and braced myself to meet some of my style heroes. Among the guests in attendance I got to meet Genevieve Gorder, host of Dear Genevieve and judge on HGTV Design Star, Vanilla Ice of 90’s hip-hop fame and star of DIY Network’s The Vanilla Ice Project and yes, The Property Brothers and David Bromstad. And Lord. Have. Mercy. They were all dressed sharp! I’m a very fortunate guy to have the job I have, I don’t even care if that makes me a corporate sell-out (take THAT, 16 year old me!).

It felt good to be able to get back into those maroon cords. Felt good to tuck my shirt in and not feel like my belly was hanging down to my knees. As of this morning I have lost 24 lbs and am only three weeks away from completing my nine week 5k training program! I’m now also just over 2 short weeks away from my follow-up doctor’s appointment to confirm I’ve done everything right. As much effort as I’ve put into this it seems a little stupid that I’m still considering the possibility that parts of me are still broken but I’m definitely looking forward to that appointment so I can be definitely sure. I guess at that point I can start naming these blogs something other than “Reboot”.

Finally we made it to the Tennessee Valley Fair on Friday night. Nestled on the grounds of Chilhowee Park in Knoxville, this was the first fair I’d been to in several years. A big night, Friday was, as Ginuwine was in concert beginning at 8:00. As much as we’d love to go watch him play his 90’s hit Pony for 45 minutes we skipped down the rows of hurl-inducing rickety rides, deep fried foods and Duck Dynasty tees armed with my Canon EOS Rebel SL1 with the 58mm kit lens and 0.43x super macro wide-angle lens attachment to put into practice some of the techniques I’d read / learned about in the previous weeks, partially thanks to an e-book I downloaded thanks to WordPress but mostly because of a great article found this week on Digital Photography School. Experimenting with exposure, my main goal was to capture the vibrance of a carnival or state fair and go wherever the light trails took me. Inside I saw more chickens than I’ve ever seen in my life, witnessed sideshow attractions, interacted with deformed farm animals and ate deep-fried banana pudding, which was everything I was hoping it would be. I was also able to come away with some nice photos, some of which I’ll share here: 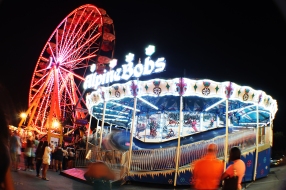 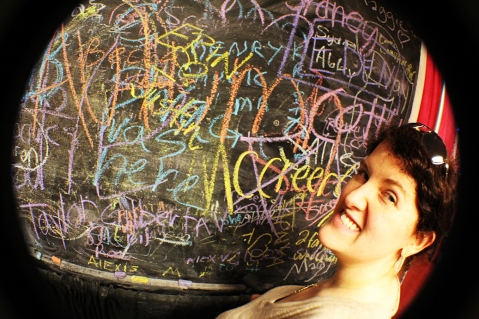