A few days ago I posted my unboxing review of the October Mantry box as well as a quick mouth orgasm that came about as a result of the Dutch Stroopenwafels from San Francisco, CA’s own Rip Van Wafels. Dying to get into the rest of the goodies I went full-on and sampled four other items on Sunday night!

Wanting to cook something quick and simple, I decided to go with the Mantry Euro Trip booklet’s suggestion of covering the Everything Bagel Fusilli from Brooklyn, NY’s Sfoglini Pasta Shop with Nonna’s Smoky Sauce from New York, NY’s City Saucery. Desiring some protein in the meal, I fried up a side of the Herb Pancetta from New York, NY’s Aux Délices des Bois and an appetizer of sliced Garlic & Cracked Pepper Cervelat by Long Island, NY’s Schaller & Webber. 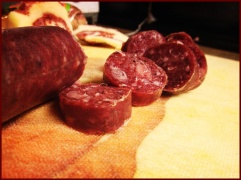 Frying up that pancetta

Nothing too fancy here. I simply boiled the pasta for about 5 minutes in salty water, heated the entire jar of sauce over medium heat in a medium saucepan, sliced up half of the pancetta and fried in a cast-iron skillet over medium heat and simply sliced the cervelat into 1/4″ rounds. All in all, dinner took about 15 minutes to make.

Starting with the cervelat: you pretty much get what you expect. Fans of smoked sausages or other similar dried/smoked cold cuts will enjoy this. I cut up about 1/3 of the sausage link (roughly 1 serving) to split between Erin and myself. Coming in at about a 65 calorie serving, this smokey sausage was super flavorful and a packs a nice punch of protein (11g per 1/3 sausage serving) while staying low on the calories. I guess the only real drawback here is the sodium content (about 780mg per 1/3 sausage serving) but I suppose that’s to be expected when dealing with dried, smoked sausage.

Next up, the fusilli. With an ingredient list that reads like the ingredients of your favorite bagels (“Organic Semolina Flour, Water, Poppy Seed, Sesame Seed, Garlic, Onion, Salt”) we were beyond curious as to how this pasta was going to work. Textured and shaped very much like rotini, this pasta cooked quickly (5 minutes to al dente in boiling water) and was probably the most flavorful pasta I’ve eaten. While I did add salt to the boiling water, the garlic, onion and sesame seed flavor really came through with this pasta.

Next, we topped it off with the Nonna’s Smoky Sauce. This sauce has the most impressive ingredients list of any tomato sauce I’ve eaten: Fresh vine-ripened New Jersey tomatoes, eggplant, onions, scallions, EVOO, fresh parsely, garlic and sea salt. That’s it. No additives, no ingredients you can’t pronounce. Just real food. But don’t let the limited ingredients list fool you, this pasta packs some super flavor, living up to its “Smoky” adjective. The roasted eggplant and tomato flavor are surprisingly strong and although I felt like we didn’t have enough sauce while plating, the flavor stretches a LONG way!

Finally, I added a few slices of the herb pancetta. The website says pancetta thinks it’s bacon but let me just say that it really needs to hold itself to a higher level. While not requiring cooking, I still lightly fried up the pancetta, seasoned with sugar, sea salt, celery extract and rolled in bay leaves and rosemary, to carmelize the fatty level and crisp up the underlying pork belly. The flavor it brought on was everything you want from a nice bacon but with the herby goodness of the rosemary and bay leaves and a hint of sweetness from the sugar. Absolutely lovely!

I’m going to use the rest of the pancetta later this week and will likely be snacking on the cervelat or serving as an appetizer as well. A simple dinner tonight, but the pure, artisan ingredients used made it full of flavor and making me wish we had enough for seconds!

#Pasta #Marinara with #pancetta bringing together @sfoglini #fusilli, @transatlfoods #pancetta, and #sauce by @citysaucery – all thanks to @mantry! #foodporn