When I was but a wee lad a laser tag place opened up in Kingsport on Eastman Rd. in what used to be Grand Slam USA. I never played there mostly because none of my friends ever went and I wasn’t big on making new friends anyway (I guess some things never change) but I did get to go inside and look at the playing field once. The room was dark with various colored spot lights, lasers and strobes scattered throughout the room. Fog machines pumped in just enough fog so you could see the beams of light stretching across the room. A giant alien-like beast appeared to be coming out of the wall and the speakers were booming the theme to the Mortal Kombat movie so loud you couldn’t talk to each other once inside. I stood there as a child staring in amazement at this attraction whose likes Kingsport had never seen before and decided: This is the coolest thing I’ve ever seen and I’ll never see anything cooler.

Now I’m sure I’ve said that many other times since then but none have compared to our recent trip to Universal Studios in Orlando, FL. As a Nickelodeon kid growing up the world of Universal Studios seemed like nothing short of magic. Knowing all of my favorite stars (cartoon and otherwise) were walking the streets of Orlando, getting to be on my favorite shows filmed on sound stages on a theme park was beyond way too cool for me. I’d see the Nickelodeon building and hear the announcer say “Universal Studios in Orlando, Florida” and would say to myself I’m going there one day.

Of course I expected to fulfill that dream before I was 29 years old but sometimes life does weird things: you go to college, you get married, you move two or three times and, unfortunately, you get older and priorities change. Lucky for me going to Universal Studios in Orlando was a goal of mine that never changed! So Erin and I loaded up her parents onto a plane at Tri-Cities Airport and made our way to Orlando for a week of fun in the extremely hot sun at Universal Studios Park and sister park Islands of Adventure to partake in the fun that such theme parks provide but to also see the Wizarding World of Harry Potter and to participate in Halloween Horror Nights, a destination Erin and I have had on our radar for several years now.

Without going into a huge review of the parks, the rides, the food, the people, etc. I’ll just say that we had a blast and what they’ve done with the Wizarding World of Harry Potter (including Hogwarts and Hogsmeade in Islands of Adventure and Grimmauld Place, King’s Cross and Diagon Alley in Universal Studios) is pure magic. I felt like a little boy the entire time we were there. It’s not like going to see an average theme park that paints the walls to resemble a scene from your favorite movie; no, they pluck you out of the hot Orlando sun and drop you in the middle of real-life Diagon Alley.

While there we drank Butterbeer, purchased wands at Ollivander’s, shopped for pranks and gags at Weasleys’ Wizard Wheezes, dared to stroll down Knockturn Alley, rode the Hogwarts Express, rode to the depths of Gringotts bank and back out again with a fire breathing dragon, toured the halls of and came face to face with Dementors at Hogwarts, and had breakfast at both the Leaky Cauldron and the Three Broomsticks. As cheesy as it sounds they have truly created a magical world that made even me, a nearly-30-year-old man feel like he had just been accepted to Hogwarts and was experiencing genuine wizardry for the first time. I spent most of my time in those portions of the park in awe.

Other highlights of the trip include me getting the absolute piss scared out of me in the Dracula and Halloween haunted houses at Halloween Horror Nights, having my expectations exceeded with some lovely curried chicken at a Jamaican restaurant annoyingly named Bob Marley’s, thinking I was going to fall out of a rollercoaster and plummet to my death, shopping for dark magic supplies at Borgin and Burkes while in Knockturn Alley and ending the trip with a blackened trout & white wine dinner under the stars by a fountain date night with my best gal on Friday night.

I took some photos and posted a lot of them to my Flickr but I thought I’d share some of my favorites here, too:

Entrance at Universal Studios at sundown 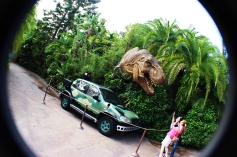 T-Rex attack on the girls 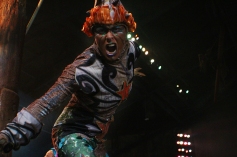 Tiger lady at the Sinbad show

The day I met Lucy 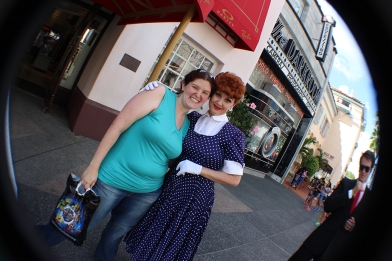 Erin met her, too 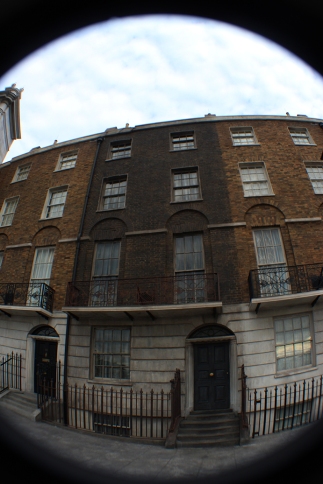 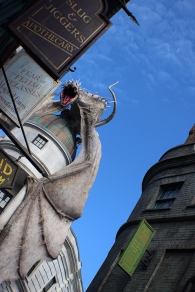 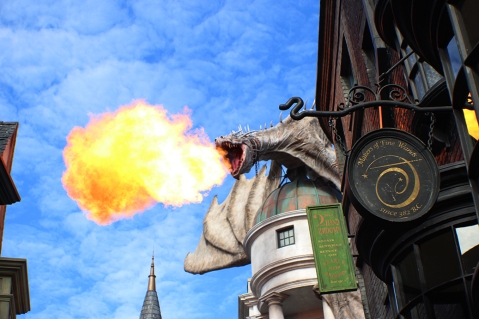 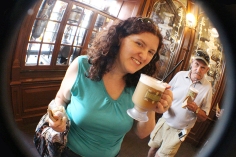 A cutie with a Butterbeer 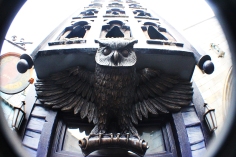 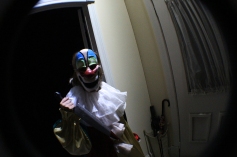 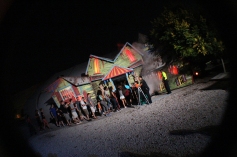 Dollhouse of the Damned 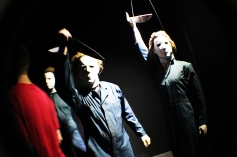 And in the event you think I’m making up the bit about the fire-breathing dragon at Gringotts: think again!

We also got to knock around in a photography studio called Shutterbutton’s and this happened:

All this to say that now-defunct lasertag place be damned: I have now seen the coolest thing I will probably ever see. Well done, Universal Studios. Well done.