Yep. Those were the first words to come out of Erin’s mouth when I told her I was registering to do the Calhoun’s New Year’s Day 5k in Turkey Creek. Since my Thanksgiving 5k was a first for us both, there were little things we both seemed to latch on to visually. Her’s was mainly the number of people in costume. Folks dressed as turkeys, the guy dressed as Forrest Gump and the family dressed as Minions. When we pulled into the parking lot at Party City this morning we began scanning the area for any potential New Year’s Baby costumes. We saw a man wearing a fish hat, tail waving in the breeze behind him, several women wearing silky skirts over their leggings and a few real-life babies but unfortunately no 5k participants that were dressed the part (though Erin insisted there were several people who were acting the part).

And so at 9:00 am my bro Alli and I started our new year with a 5k on the streets of Turkey Creek along with hundreds of fellow runners who were braving the 20-something degree cold to start their years off right. I’d never imagined myself as someone who would be doing something like this on New Year’s Day, making the statement, “Here I am, 2015. This is what we’re doing this year.” 2014 had a way of really changing a person. Suddenly I’m all about boxing, running and hockey. Suddenly I’m doing 5ks often enough to be considered “regularly”. Suddenly I have a morning workout routine 6 days a week. Who. The. Hell. Am. I?

For what it’s worth, the 5k was a success, though I was unable to get an official time. I don’t mean to and don’t want to gripe because I’m certainly grateful for the people that put these events on, the sponsors that get to put their logos on the event shirts and the fact that I’m healthy enough to even participate…but the race was riddled with issues. I was eager to get an official time at the race because I had basically ran the exact same race back on Thanksgiving and was looking forward to beating my 35:06 time. As I crossed the starting line I hit the “start” button on my Runtastic iPhone app and about 6 or 7 seconds later Runtastic was moving right along with me. After about 10 minutes I received the “Distance: One Mile” notification from my app but I certainly hadn’t seen any mile markers on the road. It was at least another 60-120 seconds or even longer before I passed the race’s official 1 mile mark. Whatever, though – maybe Runtastic is off today?

Turns out Runtastic wasn’t off – the course was definitely measured out incorrectly. The standard 3.1 mile 5k distance was actually a 3.37 mile race this morning, leaving everyone from myself to seasoned runners questioning their odd times as they crossed the finish line. An extra quarter mile (ish) doesn’t sound like a lot but when you consider that I was trying to beat my original time, it’s a long way. After I crossed the finish line I grabbed a cup of Gatorade they had graciously set out for the runners and made my way over to pick up my official time. After three unsuccessful attempts to print my time off I was asked to walk back across the finish line. It was then decided that my chip wasn’t working and I would not be getting an official time. According to my Runtastic app, I ran 3.37 miles with a time of 36:55 with a average pace of just under 11 minutes / mile, which leads me to believe my (actual 5k) time was somewhere between 33 minutes and 34 minutes. I’ll take it! 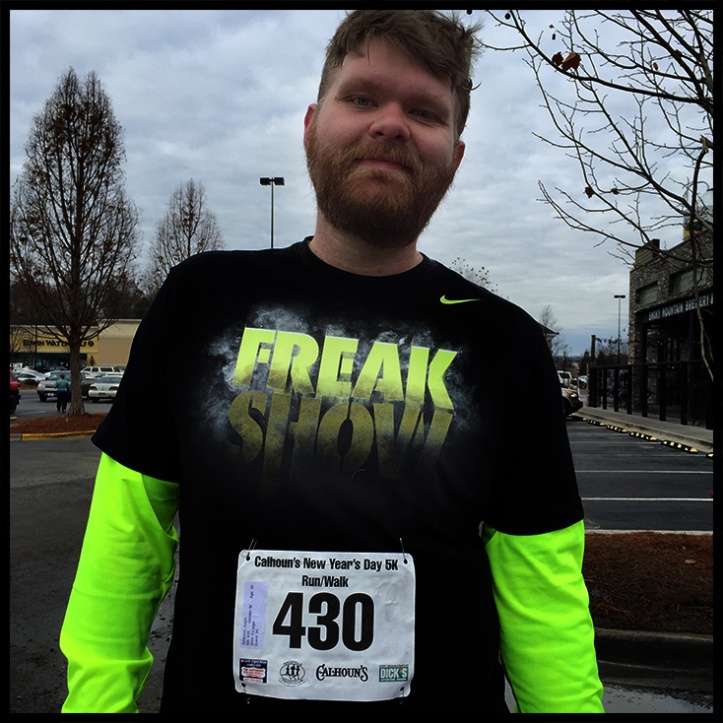 So there’s that – a 5k on NYD. One can’t say I have a “get healthy” resolution for 2015. I guess “stay healthy” would be more accurate because the “get” part has already happened. I don’t remember what my resolutions for last year were aside from “get healthy” and “read more”, both of which I’ve done. Resolutions are just like any other life goal – they’ll probably change before long and that’s if you can even remember them in the first place. My resolutions are usually short, sweet and usually attainable so for 2015 I’m looking to:

And I guess that’s it. Three things. Three sort-of open-ended things that could potentially go anywhere, yes, but they’re there and that’s how we’re starting this 2015. As always, thanks for reading and please don’t leave. I hope everyone has a safe, lovely and successful new year!