I read something in the last week or so, probably from Men’s Health’s Guy Gourmet, that said #FoodRule If at first you don’t succeed, cook, cook again. That’s pretty great advice, even if it does seem a little obvious.

When we lived in North Carolina and I was only beginning to learn to cook I tried making a homemade pizza dough. Following the recipe’s instructions, I mixed my dry ingredients in one bowl, my wet in another, then dumped the dry onto the countertop, creating a well in the center. When I poured the wet ingredients into the well they did exactly what science and nature wanted them to do and ran, quite literally, all over the place. It was a disaster and we were still picking dried yeast and flour out of the cracks between the counter and stove on the day we moved out of that apartment. That was awful, but if I didn’t “cook, cook again” I would’ve never gotten over it and would’ve never made the best homemade pizza I’ve ever made last week.

Same goes for that time my salmon was, apparently, freezer burnt and sucked fiercely in the center. Same goes for the time I made boring tilapia with a “rindy” mango salsa. Same goes for all the other mishaps, accidents, failed shortcuts and all-out poor jobs I’ve accomplished in the kitchen over the years. You’re going to make bad things: the key is to bounce back from it with at least some form of grace. It also helps to remember that if dinner really is that bad, Taco Bell is open LATE.

I’ve spoken about it before here but I’m a stickler for a nice presentation even when I’m merely cooking for Erin and myself. Dinner may taste wonderful but if it doesn’t look good then I chalk it up as a fail and mark one up under my culinary L column. I’ve also been known to curse, stomp and even throw things when something doesn’t “look” the way it should but this isn’t the place to discuss those events :-)

Last night’s dinner was dangerous and was, as lame as it may sound, a ballsy thing for me in the first place. For the first time I was tackling meatloaf. That may not sound like a huge deal but I have a history with meatloaf and have formed many unfavorable opinions on the subject.

I’d like to preface my first point by saying that my grandmother was a great cook. Her Thanksgiving potato “filling” should be world famous and I remember requesting her salmon patties as often as she’d be willing to make them. She could bake like a woman possessed by the devil of granulated sugar and when the monthly fellowship luncheon was on down at the church she was always the one bringing crock pots of roast beef or soup beans with homemade cakes or pies, biscuits or rolls, casseroles or cold salads while everyone else was bringing store-bought fried chicken and those rock-hard chocolate chip cookies. All that to say: My Gran was a helluva cook.

Except meatloaf. From what I remember, Paps was a fan of meatloaf and so she would make it for him fairly regularly and since I stayed with them for half of the time I would also eat that meatloaf on the regular. And, poor thing, it was awful EVERY time. Dinner at Granny’s was one of those things where you had to eat two servings of everything on the table lest you be accused of not liking it. And I did this well except on meatloaf day. I would spend dinner crumbling the loaf up and mixing it in with my mashed potatoes and peas, even sopping all of that up with a dinner roll, all in an attempt to mask the taste of her meatloaf. It was just bad all the way around. My mom would make meatloaf, too, and fairly regularly as well but thankfully hers was more tolerable. I remember a thick layer of ketchup that would turn gelatinous during baking smeared across the top and I think this was the saving grace for mom. Woe be unto me if the loaf was prepared alongside scalloped potatoes*, another food item I never cared much for.

So having a history of mostly no-good meatloaf aside the fact remains that meatloaf sort-of sucks just within its own name. Meatloaf. Meatloaf. Quite literally a loaf of meat. A loaf is something meat should never be able to make. Just hearing the word brings up images of the meaty remains of a butcher’s table, gelled together with dried blood and pus, crystallizing in the walk in freezer. Meat simply doesn’t loaf but it does work well in nice round patties called hamburgers. In fact, that’s one of my favorite uses of meat and I think is a much better use. You’re out of your mind if you think otherwise.

Finally, there’s the fact that I’m kinda snobby when it comes to the idea of meatloaf. Meatloaf, to me, isn’t something a civilized kitchen has the ability to make. It is served at places like Shoney’s, Ryan’s and Golden Corral, all of which are places any person that considers themselves fans of food should never step foot in. To me, if you make and enjoy meatloaf then you probably cook out of a box, frozen or otherwise, at home and consider an additional sprinkle of shredded cheese to the finished product the sign you’ve become a culinary mastermind. At my house we do not cook out of a box and if you think that means we’re stuck-up foodies then you’d be correct because that shit just isn’t going to fly in my kitchen.

…Unless my wife wants me to give it a shot.

Yes, Erin likes meatloaf. She’s eaten it in the past and enjoyed her experience. We’re still waiting on her test results from the lab to determine if she truly has lost her marbles. Until then, I had a thought: I don’t like meatloaf, Erin does. As a home cook, it is my job to make food that my guests (usually guest) are going to want to eat and if my guest likes meatloaf then I’d be a total jerk to not at least attempt it once. Just because I don’t personally care for it due to past experience doesn’t mean I wouldn’t be able to improve it – and what kind of home cook would I be if I were too afraid to give it a shot? Meatloaf Challenge: ACCEPTED

…And this is where the Close Enough part comes in. I found this recipe from PaleOMG for Bacon Chorizo Chipotle Smothered Meatloaf. Even if it was meatloaf it’s made with ground beef and chorizo and is topped with bacon and chipotle mayo. Additional ingredients include spinach, mushrooms, carrots, onions and garlic so even if it sucks it should still be good, right?

In the end, yes, it did taste pretty good considering it was a bonafide meatloaf. Chorizo is one of my favorite things and it made for a good addition to the standard meatball-like flavor and consistency of your typical loaf. The bacon was chewy, yet crispy around the edges and the carrots were still undercooked enough to give a nice soft bite when they popped up on the fork. As far as pleasing the palate was concerned, my meatloaf was a success.

As for presentation, though…Well…Let’s just say I was reminded of this classic “Close Enough” meme. Go ahead and have another look at the recipe from PaleOMG real quick. I’ll wait for you here…

Now feast your eyes on this: 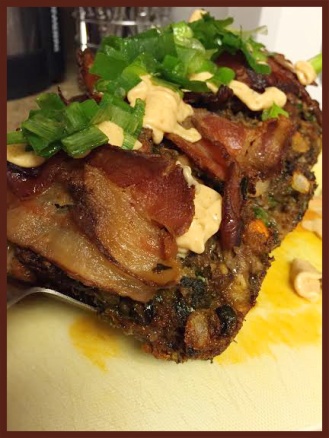 Ruined. For starters, I didn’t tuck my bacon strips far enough down into the sides of the loaf pan so when it started cooking it started curling up. By the time it was finished I had bacon “curls” on top of a meaty head. I didn’t cut my carrots up finely enough so there were spots of carrots poking out giving my already awkward teenager of a meatloaf giant carrot zits. I took the lazy route and decided to not make my own chipotle mayo and opted for the pre-made version created by Kraft so my creamy garnish came out of a semi-rectangular spout from a squeeze bottle the combination of which made it virtually impossible to form a steady stream of mayo for a presentable garnish so instead my meatloaf had nice pinkish blobs scattered throughout. To top it all off there simply was no slicing it. I dug my chef’s knife in directly in the center and my loaf just started to cave. Granted, I probably should’ve let it cool a little longer but I’ve never made meatloaf how the hell am I supposed to know this? There was no way of saving it so I just plopped it down on the plates alongside some coconut creamed spinach that I’ll probably never make again and said bon appétit.

It pleased the wife, which I guess was the original intent, but it still bugs me that I wasn’t able to present it well. If at first you don’t succeed, cook, cook again, I suppose, but I have a hard time believing I’m ever going to make meatloaf again. It could happen, yes, but as a great philosopher once said “It could happen…And monkeys might fly out of my butt!”

*Scalloped potatoes is something I’d like to give a shot, myself. If I remember correctly the scalloped potatoes I had growing up were prepared with a mix that came out of a little red box. I think this can be made well if one uses REAL food.