Well, I didn’t realize I didn’t post about #memorialDayFood last year, which is odd because I’ve taken quite a liking to posting about the new recipes I try out on Memorial Day. Much like Memorial Day, 2011 I like to try new recipes for breakfast, lunch, dinner and dessert as my way of being patriotic in my kitchen since I’m not really patriotic otherwise.

…And today is Memorial Day 2013. I’ve got my cray American Flag tank top I’ll be sporting and a full menu made out for the day and I intend to post each course separately over the next four days.

To begin with, Erin is getting breakfast in bed while we watch another episode of Arrested Development season 4 accompanied by Piña Colada Casserole, a variation of what you’ll find here.

Since this really isn’t intended to be a recipe post, I’ll just cover what’s shown in one of the photos. The need included eggs, butter, bread, sugar, canned pineapple (recipe calls for crushed, I had diced that I crushed), some coconut & cinnamon – both items I decided to add to the recipe. Everything goes together in a heaping, sloppy mass and dumped into an 8″x8″ pan and baked for 45 minutes at 350º.

Adding the coconut was a pretty awesome decision, in my humble opinion. Leaving it on top made it bake extra crispy for a nice crunch to the warm mushiness of the casserole. The cinnamon was added just for color. I will definitely make this again, but I think maybe I’ll use a little less butter – it was tasty cakes, but a liiiiiiittle too buttery. 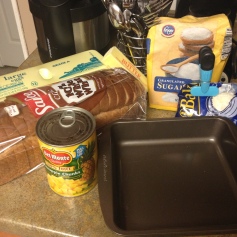 Mixed and Ready to Bake