When I was little I, like most everyone else my age, loved to watch Where In the World is Carmen SanDiego? I remember the game format, the host, the chief, the villains, and that memorable theme song by the ever-talented Rockapella. I was never very good at the game show as my geographical knowledge was limited at best at the time, but it was still a fun show. One thing I’ll never forget is when they asked the question about Dollywood.

For my friends abroad and for any readers outside of this area that have never been, Dollywood is a theme park that originally opened in 1961 as Rebel Railroad and featured a small amount of tourist attractions with an American civil war, pro-confederacy theme. Rebel Railroad was sold and became Goldrush Junction in 1970 before it was sold again in 1976 when it then became known as simply Goldrush. Another name change came in 1977 when it became Silver Dollar City and it kept this name for nearly a decade. In 1986 the lovely country music star and actress Dolly Parton bought a large share in Silver Dollar City and renamed it Dollywood. In the years since, Dollywood has more than doubled in size, serves about 3 million visitors each year, and has become the largest employer in Pigeon Forge, a town where nearly half of all jobs are in the tourist entertainment industry and grossed an astounding $105,828,353 in the month of August, 2015, alone (last recorded).

Needless to say, Dollywood is a pretty big deal in east Tennessee (one more quick stat: Dollywood is the biggest ticketed tourist attraction in the entire state). Over the years I have visited Dollywood’s park more times than I can count, especially when I was younger. We now live in Dollywood’s back yard (or is Dollywood in ours?) and we don’t visit it often, but we have (mostly) fond memories of the park, itself, their rides, their expensive food, and (this is important) their yearly Christmas light extravaganza. Every year around late October/Early November the park puts out thousands – maybe even millions – of Christmas lights throughout the park along with probably hundreds of Christmas trees and other visuals that celebrate the traditions of a southern Appalachian Christmas holiday.

We’ve visited the park many times during this time of year – sometimes in the crippling cold – always sipping some of the hot chocolate they make so tasty, sometimes nibbling on a nice, warm cookie from one of the many bakeries, but always in awe of the beauty that can be created by an overwhelmingly large number of Christmas lights. One thing we’ve never done, though, is run in the park – let alone a 5k – so when we were presented with an opportunity to do so, we leapt at it.

Dollywood’s annual Light the Way 5K rolled into Pigeon Forge on Friday night with a start time of 11pm. It was pretty nippy out and there were a LOT of people in attendance but a race starting so late with the promise of gorgeous Christmas lights and accompanying music to guide us along our path was invigorating and I was very excited despite the fact that my teeth were chattering and my bare legs were so cold they were angry.

Erin and I met up with six of my coworkers at the gate and were soon ushered up to the starting line where I got my first dose of just how many people were there – 1,759 total. Due to a late packet pick-up and many of us taking last minute bathroom breaks we were a little bit late getting lined up, but we were still really excited. After a quick team photo, we braced ourselves for the start of the race.

And here’s where my griping begins. A few weeks before the race I was following the official Facebook event page and noticed a lot of people were asking if it was okay to walk. No big deal, really, everybody has their first 5k experience and don’t know what to expect. What I wasn’t ready for was the crazy number of people who were not only there to walk, but also lined up IN THE FRONT. And 1,759 people is a lot of bodies to line up at a starting line without the use of a corral system. I spent my first mile trying my best to navigate my way around walkers who were walking 5-6 wide on an already slender path, often forcing me to go “off road” to pass them.

Going off road isn’t a problem for me, most of the time, but this was particularly difficult because it was very dark. Weird to say it was dark at a race whose claim to fame was the route it took you around the park to see the Christmas lights, no? Well, it’s true. In fact, it was nearly 1.5 miles into the race before we encountered any lights. LAME.

On some positive notes, it was still a great race for me for many reasons. Though still in the dark and working to pass lots of walkers and slower runners, I was surprised to hear my Runtastic say that at the one mile mark my time was 10:50. I’ve been both surprised and impressed with myself for bringing my pace down closer to 10:00 than it’s ever been, so I was motivated to keep it up as I moved along. Once you reached the area where the lights were it was, indeed, probably the most gorgeous race I’ve ever gotten to run. At that point the walkers had all been left behind and I had found a small group of people that were all keeping a pace similar to mine so I was able to relax and take in as much of the lights as possible. My mile two was finished with a pace of 10:05! What was happening to me? Mile three was the best yet made up of all lights and passing through the bits of the park I’ve always been so familiar with. The first half was mostly uphill but when I thought I was going to have to slow it down I passed the biggest Christmas tree in the park right when the loudest music of the night kicked in with something triumphant and lifted my spirits and had me nearly sprinting toward the narrow path that indicated the end was near. As I began the winding downhill path that lead to the finish my Runtastic said that at mile three my time was 30:27. My previous PR was at the Fireball 5k and was 33:05 – my goal for this race was anything less than 33:00 so when I heard my time was just a shade under 31:00 with only 0.1 miles left, I kicked it into high gear and sprinted to the finish. 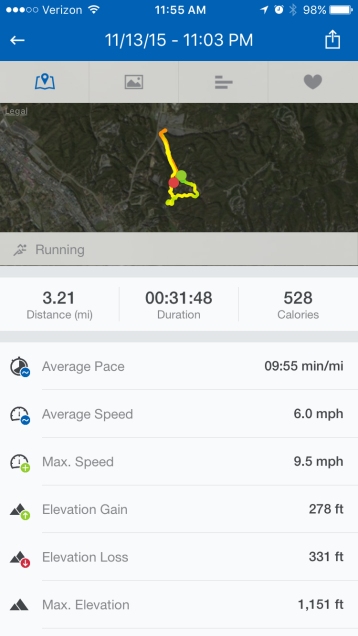 Some of my coworkers ran, others walked/ran, others walked, but we all finished and we all rocked it very hard. Erin, Allison, and I celebrated with a 2am run to Steak & Shake before the short ride home putting us in bed around 3:30am. Saturday was, therefore, lost to sleeping until noon, having lunch, and then napping until the early evening. 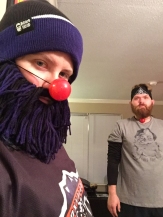 Erin and I modeling the noses in our welcome packet

I take selfies with Erin’s phone

And so now I need to bring up my infamous “one run per week” routine I’ve apparently created. I’m not going to say “do it”, but all I’m saying is I keep adding mileage to my long-run (next week is 8.5 miles) and I beat my 5k PR by over a minute AND ran my first sub-10 mile, all while only running once per week. If you’re also going to the boxing gym 4 times a week, maybe you should go for it, too :-)

But for real – I did run today, too. A very slow 4 mile trot with some sprint/walk intervals thrown in, mostly just to work out some of the remaining soreness in my feet/ankles. I really do intend to change up my 1 run per week routine, but we’ll just have to see how well I handle it.

And my YTD looks like this (with race times added again)