This might sound crazy to some of y’all but this was one of the highlights of my road trip.

Most everyone knows that I’m a sucker for random roadside shtick, especially if it’s strange, in bad taste or is offensively religious (or offensive to the religious!). Given this last point, it may come as a surprise to a lot of people that I’m WAY into religious symbols, artwork and other creative ways people express their belief in whatever god they choose to believe in.

Let me get something off my chest, though — something I DON’T like? When old friends act like they want to get back in touch, maybe catch up, so they ask for your address. When you check your P.O. Box and see two envelopes with their name on them, you get excited about it. But when you open them up? They’re well wishes, but mostly a smug attempt at saying “you’re wrong” because you don’t have the same religious beliefs they have.

This really happened to me last week and no, I wasn’t a fan of it. Also: Their attempt to save my soul didn’t work. My soul isn’t lost. My patience with religion and the religious may be lost, but definitely not my soul. Find something better to do with your time.

Something I DO like — stories about religious freaks that did freaky shit in the name of their religion. Enter the Reverend Harrison Mayes. 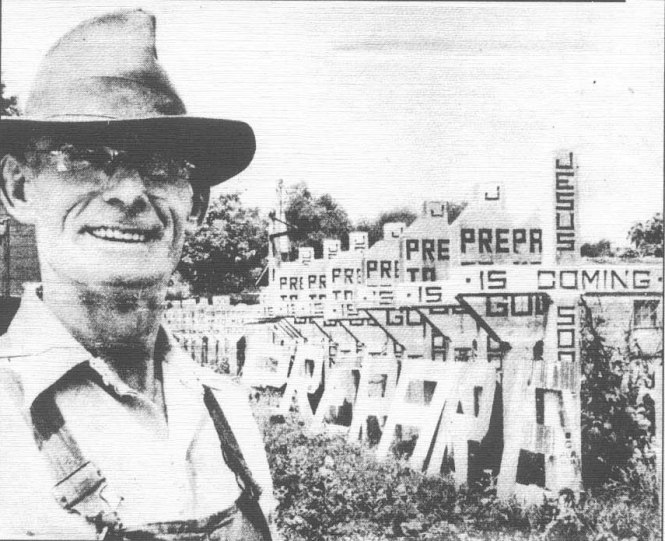 Reverend Mayes was a Kentucky coal miner who made a deal with his god that he’d dedicate the rest of his life to him if the deity saved him from a collapsed mine. The Rev survived, and unlike everyone else that makes a deal with god, he followed through with his promise. Mayes spent the rest of his days constructing concrete crosses and hearts that professed his faith — usually with the phrases Get Right With God or Made Right With God. He’d take these monstrosities around the country in a friend’s truck and erect them in various, seemingly random places. Often these places were on private property so he’d include a note that told the landowner that if they were to remove the sign they were at risk of burning forever in a lake of fire.

Mayes built a house for himself in the shape of a cross and even constructed a few signs with instructions on where to erect them after his death (in 1986) — some of them on other planets, even. The vast majority of these signs have since been removed or have been eroded past recognition. There’s a museum in Clinton, TN, that boasts an enormous collection of his work. However, it’s not unheard of to still run across one of his pieces of art in the wild, and that’s exactly what I did while driving through Cleveland, TN, on my way back home. There, on the roadside next to Dalton Pike Baptist Church was one of Rev. Mayes’ crosses. 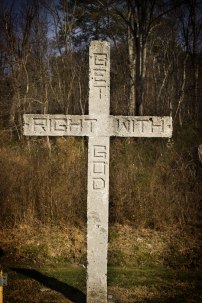 When I realized what I had just driven past, I immediately pulled a U-turn and went back with my DSLR in hand. I wasn’t about to let such a strange piece of religious gold pass me by and in a strange way I feel fortunate to have gotten to see it.

Anyway, when you’re driving along the lesser-traveled roads in the south, keep your eyes open. You may come across the life work of an infamously delusional coal miner that really loved his god.