Possibly big news, and why it’s a big deal:

Anyone who knows me knows good and well how I feel about censorship, especially when it applies to the arts in any way. I don’t particularly care for swastikas or dead babies or even landscape impressionism, but if it’s meant to be art and is part of an artist’s artistic vision nobody should have an opinion as to whether or not the piece is appropriate. I hate censorship and if you’ve followed me for any amount of time you’d know that I once lost an incredible show and an even more incredible job because I refused to be censored. I hated the consequences following it, but I stand by my words and actions every second of every day and will stay that way until I stop creating.

That being said, the MPAA – the organization responsible for putting tacky little ratings on all of the films you’ve ever seen in a theater – made an announcement earlier this week that could indicate a change in the horror film industry, either in the form of putting tighter restrictions on them, or loosening them up, both of which could have awesome and terrible outcomes simultaneously. I’ll explain:

Stories of filmmakers having to adjust their films based on MPAA ratings are all too common and not just in the horror industry. The Fast and the Furious, a film released earlier this decade had to cut several seconds of a bleeding arm because with the footage, the film was to receive an R rating (after the cut they got the PG-13 they were looking for). Rob Zombie’s “House of 1000 Corpses” had its share of trouble just trying to find a studio to release it, all because the other studios didn’t think Rob could even get an R rating out of it. Why is this such a big deal? On the outside, it seems fine, ya know, “Hey, honey, the MPAA is doing our job as parents by screening these films ahead of time and determining what’s appropriate for our children, isn’t that great? One less thing for us to be responsible for!” I realize this is an extreme, but you get the point. The MPAA acts under the guise of providing “guidance” for parents to let them know if a movie is alright for their kids to watch. What’s so wrong about that?

What’s wrong is that along with a film’s rating comes a slew of other do’s and do-not’s. A film’s rating can alter how often a film’s trailer is shown on TV and on what channel (and time), where on the internet it can be shown and even if it can be advertised in certain newspapers. Advertisement is money and if you’re a big mega conglomerate corporation looking for the big bucks for your sleazy self, advertising dollars is a must, so the studios will pressure film makers to alter their creations just so they can pull in a few extra bucks by putting their ad in front of more eyes. There’s nothing wrong with advertising a film to make money from it, in fact, it’s generally called for if you’re looking to make a living doing this stuff, but at what cost? Should an artist be forced with the choice of either not getting a film released if they don’t make cuts to something they’ve perfected in their eyes?

So how should one read this statement? On one hand, I’m reading that they plan on loosening up their ties a little and accepting the fact that general horror trends have gone the way of the more extreme, therefore the gratuitous blood, tits and gore are more accepted and, in many ways, expected from their audience. This works out great for those who decide that the best way to approach horror is to make their audience as uneasy (and queasy) as possible. I love gratuitous blood, tits and gore, and would love to see this adopted as more of a standard in the horror genre.

Or, you could read the statement as a possible threat to the gore loving horror fiends of the world, forcing film makers to cut back on their creations even further for the sole purpose of getting a “better” rating from the MPAA. There’s no way around this, it would be a vulgar display of power and censorship by the MPAA, something I will stand against until my dying day. HOWEVER…

And this is a very big HOWEVER…Like it or not, the MPAA are here to stay and won’t be going anywhere for a long, long time, if ever. If they go this route, yes, it will cause the mainstream horror genre to have to clean itself up a little bit, but I also see in this a great opportunity. While I stand beside my previous statement about gratuitous blood, tits and gore, I also think that in a lot of mainstream (and a lot of indie for that matter) horror, these elements are used in place of clever film making and talent. Take a look back at Nosferatu in 1922, or a little later like 1959’s House on Haunted Hill. These films are generally terrifying films, and will be considered classics for the remainder of time and beyond, and there’s not a bit of blood, no tits, no gore, just terror and good old-fashioned scary story telling.

Terror and good old-fashioned scary story telling – items that require a talented film maker with a talented crew. Now THAT would be an awesome new direction for mainstream horror to go in. I’m not going to hold my breath, though.

This is my favorite visual from the history of the horror film, can you guess the movie? 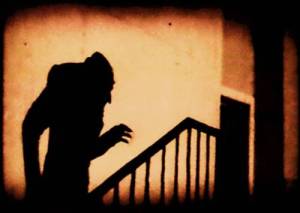 An old, fake lip ring
rests in the eye of a skull
with no lip to pierce